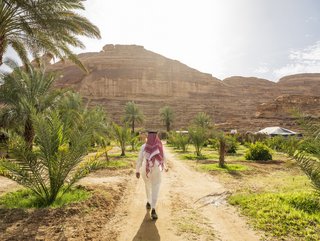 Masdar, the UAE-based renewable energy company, has pledged to strengthen its support for Saudi Arabia’s clean energy objectives, with the opening of a new dedicated office in the Kingdom.

Masdar said that it will also participate with partners in the upcoming Round 4 tender announced by the Saudi Power Procurement (SPPC) for wind and solar projects, with a combined capacity of 3.3 gigawatts.

The renewables firm is already contributing on several projects in the Kingdom, including the 400-megawatt Dumat Al Jandal Wind Farm – the country’s first and largest wind power project in the Middle East. It began electricity production in 2021.

Developed by a consortium consisting of Masdar, EDF Renewables and Nesma Company, Dumat Al Jandal will generate enough clean energy to power 70,000 homes while displacing 988,000 tonnes of CO2 per year, once fully operational.

The inauguration event for the office, located in the capital Riyadh, was attended by HE Sheikh Nahyan bin Saif Al Nahyan, UAE Ambassador to the Kingdom of Saudi Arabia, along with representatives from Masdar partners, Saudi government officials, and industry leaders. Mohamed Jameel Al Ramahi, Chief Executive Officer of Masdar was also present, along with other Masdar executives.

H.E. Sheikh Nahyan bin Saif Al Nahyan, UAE Ambassador to the Kingdom of Saudi Arabia, said: “This occasion reflects the close ties that unite our two countries, as well as the strength of the strategic relations between the UAE and Saudi Arabia. These ties are based on a solid foundation supported by the leadership of both nations and work to achieve shared developmental goals for a more prosperous future and increased Emirati-Saudi integration in various fields.

“We are committed as countries and peoples to cooperating in this regard, not only for the benefit of our countries but also for the region and world at large. The UAE and Saudi Arabia remain keen to strengthen strategic cooperation and leverage joint resources and capabilities.”

Masdar is also developing the 300-MW South Jeddah Noor Solar Photovoltaic Plant, through a consortium led by Masdar with EDF Renewables and Nesma Company as partners. The consortium signed a 25-year Power Purchase Agreement (PPA) with SPPC last year to design, finance, build and operate the plant, which will be in Third Jeddah Industrial City, 50km south-east of Jeddah, the statement added.

Abdulaziz Omar Al Mubarak, General Manager of Masdar in Saudi Arabia, stated: “Establishing a physical office further demonstrates our commitment to Saudi Arabia and will help ensure we are aligned with the Kingdom’s Vision 2030. The Saudi office will not only look over our existing assets, but it will also play a key role in the development of future pipeline projects here. Masdar is committed to providing best-in-class services and solutions – whether that be providing utility-scale projects or solutions for commercial and industrial customers looking to offset or reduce their energy bills.”

Mubarak added that the SPPC’s Round 4 tender will be for three wind power plants with a combined capacity of 1.8 GW, and two solar parks totalling 1.5 GW. The plants are part of the country’s National Renewable Energy Program, he added.

Saudi Arabia has plans to generate 50% of its electricity from clean sources by the end of this decade and is targeting 58.7GW coming from renewable sources. The world's biggest oil exporter has also pledged to cut its carbon emissions to net zero by 2060, with plans to invest more than US$180bn to reach that goal.

Under its Vision 2030 objectives, the Kingdom is also looking to explore developing the potential of the commercial and industrial (C&I) sector for solar power generation. Accordingly, Masdar sees considerable potential to target this segment through Emerge, the joint venture it established with EDF to collaborate on opportunities in distributed solar generation, energy efficiency and street lighting in the UAE and Saudi Arabia.

Emerge is actively developing multiple off-grid and on-grid projects, which will be streamlined once approved by the Saudi Water and Electricity Regulatory Authority (WERA), the company added.

“This new office will support Masdar’s ongoing growth and expansion in the Kingdom, and it will better enable us to help diversify Saudi Arabia’s energy mix and meet the ambitious renewable energy targets outlined in Vision 2030. We look forward to working with our partners to continue to deliver world-class clean energy projects in Saudi,” he concluded.