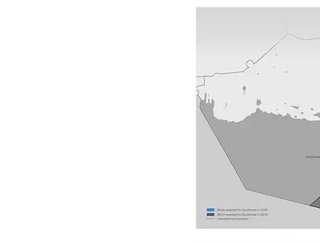 Agreement will see US firm invest £104.3 million to explore for and appraise oil and gas opportunities in 4,212sqkm block in Abu Dhabi emirate...

ADNOC says that the award has been approved by Abu Dhabi’s Supreme Petroleum Council (SPC) and follows the council’s endorsement last month for the company to begin awarding exploration blocks in Abu Dhabi’s second most competitive block bid round.

The award to Occidental represents a further deepening of the UAE-USA strategic bilateral relationship, as well as the continued expansion of ADNOC’s strategic partnerships with entities that can provide technology, capabilities, capital, and access to key growth markets for the company’s crude oil and products.

Occidental will hold a 100 percent stake in the exploration phase, investing up to £104.3 million, including a participation fee, to explore for and appraise oil and gas opportunities in the block – which covers an onshore area of 4,212 square kilometres southeast of Abu Dhabi city.

New 3D seismic data has been acquired over a large part of the block, which combined with its proximity to existing onshore oil and gas fields, suggests that the concession area has promising potential, the statement adds.

The term of the production phase is 35 years from the commencement of the exploration phase. Onshore Block 5 offers the potential to create significant in-country value for the UAE over the lifetime of the concession.

The exploration concession agreement was signed by His Excellency Dr. Sultan Ahmed Al Jaber, UAE Minister of Industry and Advanced Technology and ADNOC Group CEO, and Vicki Hollub, president and CEO of Occidental.

“We are very pleased to once again collaborate with Occidental and strengthen our long-standing partnership. This concession award highlights the important role of energy cooperation in deepening the strong and deep-rooted strategic relationship between the UAE and the US," says Dr. Al Jaber.

“Occidental was selected after a very competitive bid round that builds on the success of our debut bid round completed last year as part of Abu Dhabi’s block licensing strategy aimed at accelerating the exploration and development of our substantial hydrocarbon resources. This onshore block offers new areas with significant amounts of conventional oil and gas potential, and the award signals ADNOC and Abu Dhabi’s drive to remain a long-term and reliable energy provider to the world," he continues.

In addition to drilling exploration and appraisal wells, the exploration phase will see Occidental leverage and contribute financially and technically to ADNOC’s mega seismic survey, which is already acquiring seismic data within the block area.

The world’s largest 3D seismic survey is deploying industry-leading technologies to capture high-resolution 3D images of the complex geology up to 25,000 feet below the surface and will be used to identify potential hydrocarbon reservoirs, ADNOC says.

“We are honoured to partner with ADNOC on a second exploration concession contiguous to Onshore Block 3, where we have completed two exploration wells with extremely promising results. We see significant potential in Onshore Block 5 and, in partnership with ADNOC, will continue to work to help unlock the vast untapped resources in Abu Dhabi,” says Vicki Hollub.

All exploration activities in Abu Dhabi are carefully planned to mitigate any potential impacts through the implementation of protection measures, the use of advanced techniques and technologies, and stakeholder engagement to minimise drilling activities in populated or environmentally sensitive areas, ADNOC adds.

Abu Dhabi’s second competitive block bid round was launched in 2019, with the energy giant offering a set of major onshore and offshore blocks, on behalf of Abu Dhabi’s SPC. Based on existing data from detailed petroleum system studies, seismic surveys, exploration and appraisal wells data, estimates suggest the blocks in this second bid round hold multiple billion barrels of oil and multiple trillion cubic feet of natural gas.

In February 2019, Occidental was awarded an onshore block in Abu Dhabi’s first competitive bid round. Occidental continues to explore for oil and gas in the block known as Onshore Block 3 that covers an area of 5,782 square kilometres in the Al Dhafra region of Abu Dhabi.