Power capacity investment to top £11.5trn over next 30 years 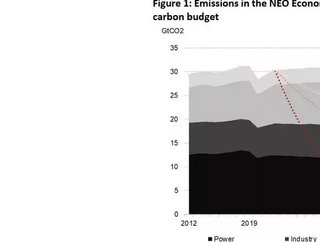 The stark drop in energy demand due to the coronavirus pandemic will remove around 2.5 years’ worth of energy sector emissions between now and 2050, research company Bloomberg NEF says in its latest New Energy Outlook 20202 report.

Using its proprietary Economic Transition Scenario, Bloomberg NEF’s latest projection of the evolution of the global energy system over the next 30 years shows that emissions from fuel combustion peaked in 2019. Down approximately eight percent in 2020 due to the COVID-19 pandemic, energy emissions rise again with economic recovery, but never again reach 2019 levels. From 2027 onwards, they fall at a rate of 0.7 percent per year to 2050.

The report states that this scenario is based on a huge build-out of super-competitive wind and solar power, the uptake of electric vehicles and improved energy efficiency across industries. However, there will be £11.5 trillion invested in new power capacity over the next 30 years with wind and solar accounting for 56 percent of global electricity generation by mid-century. An additional £10.7 trillion will be invested in the grid to 2050.

In comparison, coal-fired power peaks in China in 2027 and India in 2030, collapsing to 12 percent of global electricity generation in 2050. Gas is the only fossil fuel to keep growing throughout the outlook, up 0.5 percent year-on-year to 2050, growing 33 percent in buildings and 23 percent in industries with few economic low-carbon substitutes.

Jon Moore, CEO of BNEF comments: “The next ten years will be crucial for the energy transition. There are three key things that we will need to see: accelerated deployment of wind and PV; faster consumer uptake in electric vehicles, small-scale renewables, and low-carbon heating technology, such as heat pumps; and scaled-up development and deployment of zero-carbon fuels.”

However, despite the progress of the energy transition, and the decrease in energy demand brought by Covid-19, BNEF still sees energy sector emissions putting the world on course for a 3.3 degrees Celsius temperature increase by 2100.

Matthias Kimmel, senior analyst at BNEF and co-author of the report, explains that in order to stay well below two degrees of global temperature rise, emissions would need to reduce by six percent every year starting from now, and to limit the warming to 1.5 degrees Celsius, emissions would have to fall by 10 percent per year.

Whereas previous editions of the report focused on the electricity sector, this year’s edition includes detailed chapters on industry, buildings and transport to give a full-coverage, economics-led view of the energy economy to 2050. The report also features a Climate Scenario investigating a clean electricity and hydrogen pathway to holding temperatures to well below two degrees.

Seb Henbest, chief economist at BNEF and lead author of NEO 2020, says: “Our projections for the power system have become even more bullish for renewables than in previous years, based purely on cost dynamics. What this year’s study highlights is the tremendous opportunity for low-carbon power to help decarbonize transport, buildings and industry – both through direct electrification and via green hydrogen.”

The report sees total oil demand peaking in 2035 and then falling 0.7 percent year-on-year to return to 2018 levels in 2050. Electric vehicles are projected to reach upfront price parity with internal combustion vehicles in the years leading up to the mid-2020s. After that, their adoption accelerates, eating more and more into the oil demand growth that otherwise comes from aviation, shipping and petrochemicals.

Ultimately, energy use in buildings, industry and certain parts of the transport sector, such as aviation and shipping, have few cost-competitive low-carbon options, and so remain heavily reliant on gas and oil product, it concludes.