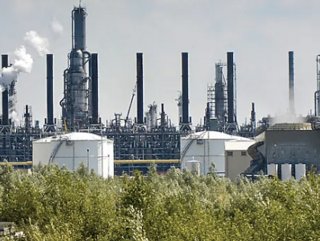 Shell Chemicals Park Moerdijk is to receive billions in investment in the next decade to support the transition to low-carbon products and those made with recycled materials.

Shell Moerdijk will build a new pyrolysis oil upgrader unit that improves the quality of pyrolysis oil, a liquid made from hard-to-recycle plastic waste, and turns it into chemical feedstock for its plants.

The investment marks a first major step in transitioning the park, within ten years, by increasing the use of circular and bio-based feedstocks, growing its offer of low-carbon products and becoming net-zero emissions through the application of hydrogen and CCS. Shell aims to use 1mn tonnes of plastic waste a year in its global chemicals plants by 2025.

“As our customers demand more low-carbon and circular chemicals we are seeing the reinvention of the chemical industry," said Robin Mooldijk, Executive Vice President, Shell Chemicals and Products.

"At Shell Moerdijk and across our global chemicals business, Shell is investing to be ready to meet our customers’ needs as they change. We are working together to deliver on shared decarbonisation and sustainability goals.

"This pyrolysis oil upgrader investment is part of our commitment to developing the chemical recycling industry, which can turn hard to recycle plastics into new and useful products, helping society tackle the key issue of plastic waste.”

Expected to start production in 2024, the unit will have a capacity of 50,000 tonnes per annum, which is the equivalent to the weight of about 7.8bn plastic bags; and supports Shell’s ambition to recycle one million tonnes of plastic waste in its chemicals plants by 2025.

Shell will use the treated pyrolysis oil to produce circular chemicals which are the ingredients used in many end products that are all around us. The investment responds to growing customer demand.

Shell Chemicals Park Moerdijk wants to accelerate the energy transition, be a leader in the transformation of the Dutch chemical industry and grow by making more circular, low-carbon products for our customers and society, added Richard Zwinkels, general manager of Shell Chemical Park Moerdijk.

This comes with three major goals: net zero emissions within ten years; increasing the use of circular and bio-based feedstocks and doubling the number of chemical products by investing in new product lines.

“We will have to be an active local partner, cooperate with governments and authorities and integrate with other businesses such as start-ups to increase the potential for sustainability improvements," said Zwinkels.

"We will open up to the outside world like businesses and universities by, for example, facilitating scientific research on our site.”

Shell Chemicals Park Moerdijk is developing plans, pending final investment decisions, to build a facility that will produce hydrogen from the residual gases from the Park’s production process. Shell will use this hydrogen to heat the industrial furnaces.

The aim is to capture and store the CO2, a residue in the process of making hydrogen, in old gas fields under the seabed.

In addition to the use of circular pyrolysis oil, bio-based feedstocks can be used. In 2021, Shell decided to invest in the construction of a biofuels facility at Shell Energy and Chemicals Park Rotterdam. The biofuels facility is currently being built and is expected to start production in 2024.

In November last year Shell took final investment decision on a 50,000 tonnes per year pyrolysis oil upgrader at its Energy and Chemicals Park Singapore, with production slated for 2023.

In September 2021, the energy major invested in plastic-waste-to-chemical technology company BlueAlp. Shell and BlueAlp will form a joint venture company to build two new conversion units in The Netherlands, which are forecast to convert more than 30,000 tonnes of plastic waste per year and the pyrolsys oil will be used at Moerdijk.

Two other units will be located in Asia to feed pyrolsys oil to Shell’s Energy and Chemicals Park Singapore.