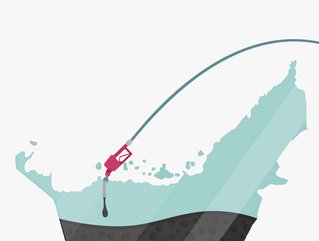 Saudi Arabia, Qatar and UAE are all set to capitalise on the realignment of global energy and Europe's diversification of Russian energy supplies

The strategic realignment of global energy and a European diversification away from Russian oil and gas supplies creates a renewed focus on Middle East hydrocarbons, according to GlobalData's MEED.

With Moscow’s decision to escalate its eight-year conflict in Ukraine sparking a global energy crisis, the data and analytics company notes that the impact of this conflict echoes the 1970s oil crisis that launched the Gulf’s first major economic boom.

Richard Thompson, Editorial Director at MEED, said: “While the Gulf’s oil producers are keen to avoid taking sides in the Ukraine conflict, long-term uncertainty about Russian oil and gas supplies will sustain high energy prices for a prolonged period and create a renewed focus on Middle East hydrocarbons that will underpin a new economic and projects boom in the Gulf.”

The immediate impact of Russia’s invasion of Ukraine was to trigger massive volatility in global capital markets and a spike in commodity prices that has added to the inflation fears already threatening the global recovery. However, the strategic impact of the crisis is to expose Europe’s overdependence on Russian energy, particularly its gas.

As a result, the coming months and years will see a strategic realignment of global energy and a European diversification away from Russian oil and gas supplies to alternative sources such as renewables, coal, nuclear and Middle East hydrocarbons.

A new UK 'Taskforce on Oil' will work closely with international partners including the Gulf, USA and Netherlands to ensure alternative supplies of fuel products.

However the UK is also exploring more investment in North sea oil and gas during the transition to cheaper and cleaner power.

“In the longer term, unless a peace settlement is reached soon, Moscow’s actions in Ukraine will see Russian oil and gas exports reduced or even blocked altogether from the global energy supply chain," added Thompson.

“The scale and pace of the reductions will be shaped by the extent of Western embargoes on Russia’s oil and gas sales, which will further expose Europe’s dependence on Russia.”

The mere prospect of oil and gas sales from the world’s third-biggest oil producer and second-biggest producer of natural gas being removed from the international market saw oil prices surge to nearly US$138 a barrel on March 7, their highest mark since 2008, and some 45% higher than at the start of the crisis.

High energy prices will be maintained for as long as the conflict continues and Moscow is sanctioned, and for as long as Europe is dependent on Russian energy. In the short term, the surge in oil prices delivers a financial windfall to Middle East oil producers, who will use the money to accelerate post-pandemic stimulus infrastructure in 2022.

Over the longer term, with rising inflation creating huge economic headwinds for the global economy, Middle East oil and gas will become increasingly vital to stabilise the energy markets.

“With its LNG expansion program underway, Qatar is well placed to become a major natural gas supplier to Europe, while Saudi Arabia, the UAE and the region’s other oil and gas producers are well positioned to increase their supplies of low-cost energy. Meanwhile, Libya, Iraq and Algeria will see renewed efforts to bring their hydrocarbons back on stream in a major way," he added.

The Gulf’s oil producers have abundant supplies of low-cost oil and gas reserves. They have proven themselves to be reliable and stable suppliers over the past four decades, and they are investing heavily to increase production capacity.

"Their investment in renewable energy and future fuel technology, such as hydrogen, provides an important ‘green’ angle that aligns with international action against climate change, as well as the ESG criteria sought by multinational corporations and institutional investors.”