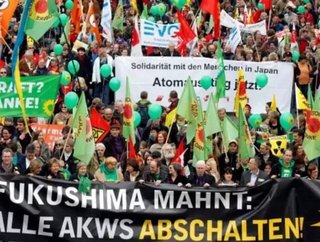 The German capital city of Berlin was rocked this weekend by over 25,000 angry anti-nuclear power protestors. Dresden, Munich, Hamburg and other Germa...

The German capital city of Berlin was rocked this weekend by over 25,000 angry anti-nuclear power protestors.  Dresden, Munich, Hamburg and other German cities (21 total) joined in the countrywide protests calling for the nation to drop nuclear power.

Nuclear power has accounted for roughly one quarter of all German power.  Following the devastating Earthquake and Tsunami that has caused reactor malfunctions at the Fukushima nuclear reactor, the German government closed seven of its oldest reactors for an announced three-month period.

CERAWeek 2011 in Review: Natural Gas the Solution to Oil Shortfall Mining Helium-3 will Transform the Dark Side of the Moon Types of Biofuels: Ethanol, Biodiesel, Biobutanol, and the Companies that Make Them READ THIS MONTH’S ISSUE OF ENERGY DIGITA

The protestors feel that German Chancellor Angela Merkel’s plan to phase out reactors over the next decade is not swift enough, and demand the closing of plants far sooner.  A study by the German environment ministry has noted that a complete nuclear phase-out could be realistically achieved by as soon as 2017 without causing blackouts across the country.

However, labor representatives of Germany’s nuclear power sector argue that massive job losses will result in closing down nuclear operations.  Also, as a byproduct of the three-month moratorium on nuclear energy, the International Energy Agency has estimated a significant increase in German CO2 emissions in order to meet electricity demand through carbon-intensive means.