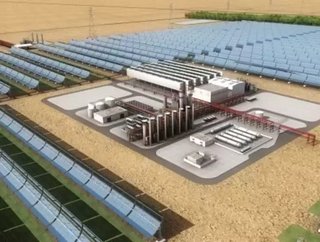 The term renewable energy encompasses a great number of different technologies, from geothermal to tidal energy, hydroelectric power, biofuels, wind, and many more. But the technology which stands out in the minds of most people is solar power, and to many this means either one of two things: rooftop panels, or large solar projects collecting energy off the side of a highway somewhere. However, solar photovoltaic panels (PV for short) are by no means the only way to harness renewable energy from the sun. In fact, 70 percent of new solar developments currently under construction utilize a technology called Concentrated Solar Power, or CSP, this correlates to about 17.54 gigawatts of future renewable energy worldwide.

The basic science behind CSP is fairly simple.

Large mirrors or lenses are used to concentrate sunlight onto a small area, which drives a heat engine (typically steam turbine) that is connected to an electrical power generator. CSP is a clean and flexible technology which unlike PV, has the capacity to store heat for later conversion into electricity, either after sundown or when clouds block the sun. Until recently CSP had been widely regarded as one of the most cost effective techniques for harnessing the sun's energy. However, process innovation, manufacturing improvements, and the decreasing cost of materials has begun to tip the scales in favor of photovoltaics.

In a recent report by private consulting firm Ernst and Young, the case was made that Solar PV installations would become cost competitive with energy from fossil fuels (without government subsidy) within the next ten years. With new technologies emerging on what seems to be a daily basis, some estimate the day where PV competes with oil on cost alone, could come even sooner. In July of this year First Solar (Nasdaq:FSLR) broke barriers by producing a cadmium telluride solar cell with a 17.3 percent efficiency. HSBC calculates that the cost of solar cells (the key component in panels) has fallen by about 70 percent since Sept 2008. General Electric

(NYSE:GE) has said that their new PV Cells should be able to generate power at $150 per megawatt-hour by 2013, similar to the cost of conventional energy. Howard Johns, Chair of the Solar Trade Association (STA) recently said, “We are on the cusp of a global solar revolution”, and if the current rapid progression of solar technology keeps up, he could be right.

The recent shift in technology from Concentrated Solar Power to Photovoltaics at the Blythe Solar Project is a sure sign of the progress that PV has made. Solar Millennium, developer of the 1000-megawatt facility currently under construction in Southern California is so convinced of the virtues of PV, that it was willing to forfeit a $2.1 billion loan guarantee from the U.S. Department of Energy. Project executives estimate that once complete, a CSP project would cost about $5.79 per watt, while PV could be as low as $3.40 per watt, therefore a switch was made. When asked about the drastic change Solar Millennium CEO Christoph Wolff said, “Our long-term strategy remains unchanged; we see solid demand for CSP in the world's growth markets.” Later he would go on to say that “the advantages of CSP as a grid-stabilizing renewable energy source with storage capabilities are obvious and highly valued by utilities.” So it would seem that given the advantages of both PV and CSP, the use of hybrid plants combining the two technologies would increase.

While the future of large-scale solar energy projects (both PV and CSP) appears to be bright, the economics of residential solar is considerably less sunny. The demand for residential PV continues to increase, but mounting cutbacks of federal tax credits and municipal rebates make it more difficult for the average homeowner to afford solar panels. At current levels the typical incentive is about 30 percent, which means homeowners will have to wait around 13 to 15 years to recoup their entire cost. As incentives continue to decrease, homes with solar panels installed via lease agreement will also be adversely affected. Fortunately there are many more cost effective and energy efficient improvements for homeowners to make before going solar.