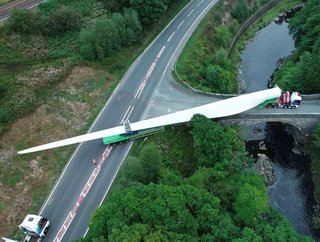 We've all experienced tight turns at the wheel - but usually not with 57-metre turbines in tow.

Two miles from the construction site, on approach to the wind farm, there was a snag: the loaded blades would be unable to make the left turn. It was proposed building a turning head would provide the required clearance to allow all 27 blades to safely navigate the turn.

Its team employed 'super wing carriers' to transport the 14.9-tonne blades,
which allowed Collett to overcome issues of vertical alignment from the main road to Eliock Bridge, avoiding the need for works to be undertaken on the listed structure.

For other components, the 25-metre-long bottom and 26-metre-middle towers, with weights of 67 and 44.5 tonnes, Collett used specialist clamp trailers, while the remaining components, the top towers, nacelle, drive trains and hubs, were transported using its 5- and 6-axle step-frame trailers.

Overall the firm worked to a detailed delivery schedule, produced in line with the site construction needs, over a period of 14 weeks.

All deliveries to the 38MW Twentyshilling Wind Farm are now complete with the nine Vestas V117 140-metre tip turbines expected to be fully operational this year.

Last month a £235 million early investment package to support the renewable energy supply chain in Scotland was announced by Ocean Winds and Aker Offshore Wind. The financial package is included in their joint bids which would build supply chain capability, many years ahead of the introduction of new floating offshore wind fields in Scotland's deep waters.

The operational date for Limekiln Wind Farm is now expected to be late 2024 "at the earliest". Together with the Limekiln Extension proposal, the wind farm has a grid connection contract in place for 106MW (click here). At the North Planning Applications Committee of The Highland Council last month, councillors voted unanimously to allow the project variation application to move to the final decision-making stage with Scottish Government ministers.