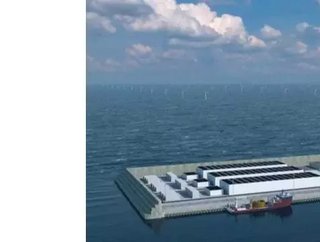 Energy Digital takes a deep dive into Denmark's energy hub which will be the country's largest construction project after official approval last week...

Every country is courting renewables but the Danes may just have put down the largest political and commercial marker, at least in Europe, after giving its wind energy hub island the go ahead last week.

The figures are ambitious. Spanning 120,000sqm, the mammoth project planned 80kms from the Jutland peninsula will be as big as 18 football pitches - it could end up three times this size - and is set to become the biggest construction project in Danish history, costing an estimated 210 billion kroner (£24 billion).

With a capacity of up to 10GW, it's a world away from the first offshore wind farm, built on the Danish island of Lolland in 1991, which had just 5MW capacity; but it illustrates how far the industry has come in 30 years, and the energy hub may serve as the next-generation platform - both literally and figuratively.

As significant as the engineering scale is what the energy hub means for European power supplies. It will strengthen the integration of Europe’s power grids and increase renewable electricity production necessary for a climate-neutral Europe. On full implementation, it could cover the consumption of 10 million European households. Just as hub airports provide efficiencies of scale, the energy hub could redefine power connectivity and redistribution.

Rubber stamping the vast project further underlines how serious the Denmark Government is about renewables; it has imposed a cut-off date of 2050 for oil and gas extraction in the North Sea and cancelled all future licensing rounds. In the meantime, Denmark's renewables charge is really taking to water; another project on the island of Bornholm will have a capacity of 2GW.

The caveats to megaproject construction are well versed, from budget controls to supply issues. Even if the designs sail off smoothly, it may not be ready for another 12 years - a long time in any era, but particularly in today's carbon-emission-pressurised times.

The installation of offshore windfarms comes with a number of challenges, notes a Chalmers University of Technology paper (click here), such as:

Conceptually, the energy hub shows what can be done - and there are no shortage of renewables projects spinning into view.

According to Wind Europe, in 2017 €7.5 billion worth of investments in Europe were committed to offshore wind energy, and while it reduces the need for fossil fuel imports, it is itself a huge export opportunity, notes Siemens Gamesa. The European Commission aims to boost its offshore wind capacity to at least 60GW by the end of the decade and even 300 GW by 2050 from the current 12GW. 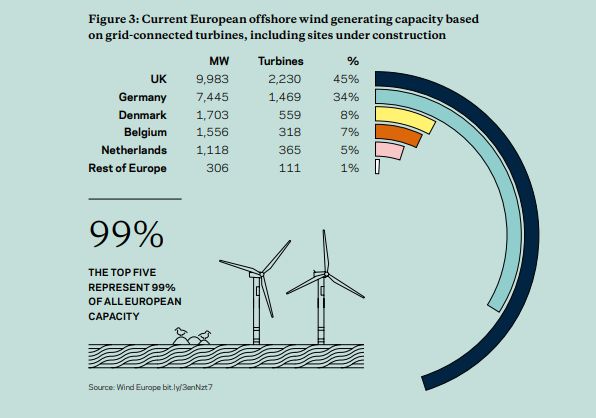 The Crown Estate recently announced six proposed new offshore wind projects in the waters around England and Wales. The six Round 4 projects together represent just under 8GW of potential new offshore wind capacity with the opportunity to deliver clean electricity for more than seven million homes and create employment opportunities across the country (click here).

Interestingly Danish utility Ørsted "is at the front of the pack" with 3.7GW of under construction or generating capacity, though Denmark is considerably behind the UK and Germany on wind generating capacity based on grid-connected turbines.

Against the backdrop of Net Zero, Ofgem has indicated it would work with Government, industry, the Electricity System Operator and The Crown Estate to develop coordinated solutions and in doing so, explore options for meshed grids rather than radial links.

Asia is a hive of activity with South Korea recently unveiling a 48.5 trillion won (US$43.2 billion) plan to build the world's largest wind power plant by 2030 as part of efforts to foster an environmentally-friendly recovery from the COVID-19 pandemic (click here).

Japan has bold plans too. The wind farms of the ¥100 billion Akita project could generate a capacity of 140MW, enough electricity to power at least 150,000 of Japan’s 52 million homes. By 2030 Japan plans to have installed a total of 10GW.

Japan can take advantage of the technology advances and cost improvements the offshore wind industry has made since its early days in Denmark in the 1990s, notes McKinsey.

Taiwan and the US have already commissioned the first small projects and plan for more than 10 and 25GW by 2030, respectively.

In the US, Vineyard Wind has leased a 160,000 acre area south of Martha's Vineyard, and 15 miles from the nearest shore. The offshore wind project will consist of an array of wind turbines, spaced at least eight-tenths of a mile apart, that are each capable of generating 9.5MW of power.

It's not just countries taking the lead. By 2025, Munich wants to be the first city to cover its entire electricity needs by using renewable power – from its own systems.

The DanTysk wind farm installation, 70kms west of the island of Sylt, features 80 3.6MW wind turbines which generate 1.3 billion kWh of electricity per year. The energy generated by DanTysk is fed into the grid in Büttel, in Schleswig-Holstein, over 800kms from Munich - but it means electricity customers in Bavaria still enjoy the benefit of sustainably generated electricity.

Around 6.5 GW of offshore wind farm capacity is planned to be built in German waters by 2020, to be followed by an additional 8.5GW by 2030.

By then, the Denmark energy hub should be nearing completion, taking European renewables to a whole new level.