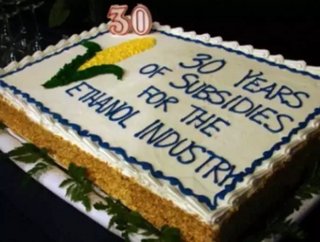 Over the course of the last decade, the ethanol industry has supported American fuel independence. Ethanol blends of ten percent have become the norm...

Over the course of the last decade, the ethanol industry has supported American fuel independence.  Ethanol blends of ten percent have become the norm at the pumps, and congress even approved blends of 15 percent (ethanol/gasoline) in just the last few months.  A vast number of flex-fuel vehicles have also made their way to U.S. roadways, allowing drivers to fill up with ethanol blends as high as 85 percent.  However, while ethanol offers a homegrown alternative to foreign oil dependence, it has relied heavily on government subsidies to jumpstart the industry.  With gasoline prices on the rise, congress is calling the subsidies—along with import tariffs—into question.

U.S. Senators Tom Coburn (R-OK) and Dianne Feinstein (D-CA) have put forth a piece of legislation that would effectively ethanol’s 45-cent per gallon tax credit and eliminate the 54-cent per gallon tariff on imported ethanol.  The “Ethanol Subsidy and Tariff  Repeal Act,” if approved, will take effect July 1.  The passing of the act could save taxpayers $3.3 billion.

Comments made by the American Meat Institute claim, “At a time when animal agriculture is facing pressures on many fronts, this legislation would ease the economic strain that is heavily impacting the industries that rely so heavily on corn to feed livestock and poultry,” the associations wrote. “Corn-based ethanol has distorted the corn market, and stretched corn supplies to the point production costs have been increased significantly.  Additionally, eliminating the import tariff will allow ethanol from around the world to compete on a level playing field with U.S. ethanol.”

An alternative bill has been proposed by Senators Charles Grassley (R-IA) and Kent Conrad (D-ND), called the “Domestic Energy Promotion Act of 2011.  Their version would see a gradual lowering of tax incentives to the ethanol industry through to 2016, instead of the immediate cutoff proposed in the Coburn and Feinstein’s bill.  The bill would also extend the alternative fuel property refueling credit, the cellulosic procers’ credit and the special depreciation allowance for cellulosic biofuel plant property.

The alternative bill has garnered support from the ethanol industry itself, with the American Coalition for Ethanol stating, “At a time of near-record gas prices and continued volatility in world oil markets, America’s growing production and reliance of domestic ethanol sources is creating jobs, keeping gasoline prices down, and reducing this nation’s appetite for imported oil. The Domestic Energy Promotion Act of 2011 would ensure we don’t abandon this increasingly vital American industry, but rather smartly and responsibly foster its continued growth and evolution.”

So as a taxpayer, what do you think?  Don’t forget that just last week, congress decided not to end the billions of dollars worth of subsidies for major oil producers (whom brought in record profits while we face record price spikes at the pump).  Ironically, within the same two-week period, congress also turned down a bill to expedite domestic oil production, which means increased reliance on foreign oil.

Now, congress is targeting fledging renewable industries, such as biofuels, wind and solar to try and put an end to the subsidies that have helped get these industries off the ground.  Why?  It all comes down to price point.  Oil is still the cheapest of these energy forms, but does it mean that we should outright abandon the others?  Most certainly not!  As a taxpayer, I would be happier knowing my hard earned money was helping to fund the next generation of companies and infrastructure that could reduce U.S. dependence on foreign oil, all while providing cleaner, renewable alternatives.  What doesn’t quite make sense is ending subsidies for tomorrow’s technology, while allowing oil companies with record profits to keep their subsidies.  What makes even less sense is claiming that these actions will boost domestic energy security, but without boosting domestic oil production.

In either case, the “Domestic Energy Promotion Act of 2011” seems like the better option of the two bills being pursued.  Cellulosic ethanol in particular holds untold promise, and is a game-changer for the ethanol industry, whose image has been tarnished by unsustainable corn ethanol production.  Yes, oil is tried and true, and we would all like to see prices at the pump come down.  But the U.S. is at a critical crossroads where alternative energy infrastructure must be implemented NOW, not later.  By continuing to favor the oil industry over alternatives, in a few decades, pump prices will be out of the price range of most average Americans, and alternative fuels will hold price advantage.  Unfortunately, if the fueling infrastructure isn’t in place, then the transition will be anything but smooth, and with energy infrastructure historically being a public sector endeavor, that means our tax money should be funding alternative fuel infrastructure development, instead of subsidizing antiquated oil infrastructure and companies that don’t even need the subsidies!