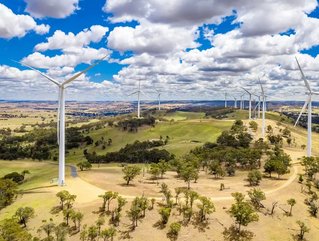 Noting that wind energy is among the cheapest and most feasible renewable energy sources currently available, Kane Thornton, CEO of Clean Energy Council (CEC) stated that the COVID-19 pandemic should represent an acceleration of interest for the country.

Highlighting that significant progress has already been made in the South as the country weans itself off of fossil fuels like coal, Thornton impressed that the energy transition was far from over.

“There’s undoubtedly more that can be done with the right transmission line infrastructure investment. Now, we see Western Australia taking up the challenge and harnessing its clean energy resources with wind,” he said.

With the net contribution of renewable energy sources accounting for 23.5% (33 TWh) of Australia’s power in 2019, CEC estimates that 8.5% was accounted for by wind - double the amount recorded in 2014 - and 35% of renewable generation.

In addition, 2019 represented a particularly fertile year for wind power, which added a further 837 MW of new capacity. Currently, there are 28 new projects either under development or financially-backed.

Thornton stated that the benefits of renewable energy lie not just in its environmental virtues, but also its ability to improve the welfare of communities with cheaper, more reliable power that can grant a measure of independence.

“The growth in wind farm development comes at a critical time for our regional and rural economies, as they’ve been battered by long-term drought and, over the last year, fire,” he continues.

“Not only are there enormous benefits for our environment as we lower our carbon emissions, but renewable energy can solidify communities, improve energy reliability and help save money on electricity.”

CEC also simultaneously announced that Marinus Link, an interconnector between the island of Tasmania and the Australian mainland, has been granted approval.

Part of a set of 15 projects (collective value: AU$72bn), Marinus Link will enable Tasmania to harness its vast wind and hydroelectric potential by providing a method of export to the mainland.

Augmenting the already accelerated renewable energy development of Southern Australia, the project could play a significant part in driving energy prices down for consumers and be a harbinger for a net-zero carbon economy by 2035.

A.study conducted prior to planning Marinus Link found that $2.9bn of value could be unlocked under current conditions, but with the potential to unlock an additional $5.7bn through further renewable energy investments.

“There are hundreds of large-scale wind and solar projects that have been identified with planning approval and are well placed to proceed quickly,” concluded Thornton.

“By accelerating approvals, $50bn of investment could be added to our economy, while more than 30,000 MW of capacity and more than 50,000 new jobs in constructing these projects, along with many more indirect jobs, would cement Australia’s position as a clean energy superpower.”