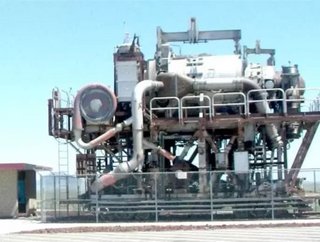 Before you read this, check out the upper-right hand corner of this page to view this article in our digital reader. Trust us, it's way cooler! Wri...

The hammer-wielding comic book superhero and Norse God “Thor” may have had a hit movie at the box office this summer, but a real-life superhero bearing the same name also holds the promise of saving the world.  The nuclear reactor meltdowns resulting from the earthquake and tsunami that struck Japan in March overshadowed a revolutionary technological advancement announced in China just a few weeks prior.  China plans to pursue thorium—named after the Norse God—as an alternative element to uranium to fuel future nuclear reactors.

Thorium is a silvery metal that is abundant here on Earth.  In fact, while the Earth’s crust holds only about another 80 years worth of uranium, thorium is as common as lead.  America actually holds great wealth in thorium, as it has been discovered and often reburied as a byproduct of rare earth metals mining.  It is estimated that there is enough accessible thorium in the Earth’s crust to power humanity for thousands of years.  Not to mention, thorium reactors cost about half of what a standard uranium reactor does.

China’s Academy of Sciences is actively pursuing a thorium-based molten salt reactor system that will create thousands of times less hazardous waste than a uranium reactor.  The waste has a far shorter lifespan of only about 300 years compared to uranium waste lasting thousands.  The system is also far less prone to disasters as witnessed in Japan’s Fukushima reactor meltdown.

“The reactor has an amazing safety feature,” says thorium expert and former NASA engineer Kirk Sorensen.  “If it begins to overheat, a little plug melts and the salts drain into a pan.  There is no need for computers, or the sort of electrical pumps that were crippled by the tsunami.  The reactor saves itself. They operate at atmospheric pressure so you don’t have the sort of hydrogen explosions we’ve seen in Japan. One of these reactors would have come through the tsunami just fine. There would have been no radiation release.”

Thorium is activated by being bombarded with neutrons, which enables the nuclear fission process.  But as Sorensen explains, unlike uranium, “There is no chain reaction. Fission dies the moment you switch off the photon beam. There are not enough neutrons for it to continue of its own accord.”

China’s pursuit of thorium nuclear technology may well help the country meet its exponentially increasing energy demand.  With large reserves of thorium deposits located in the United States, the tables could turn, and it may be the Chinese looking to the U.S. for aid in the future.