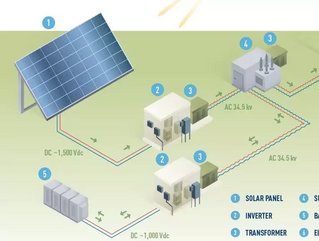 Work on the 30MW Hale Kuawehi Solar project in Hawaii is expected to break ground early 2022 and slated to start commercial operations at the end of next year.

Parker Ranch, through its renewable energy subsidiary Paniolo Power Company, is working with Canada-based Innergex Renewable Energy on the development of the project, that will supply power equivalent to the needs of approximately 15,000 households with renewable energy.

The project will be one of the first utility-scale solar farms on the Island, reducing reliance on imported fossil fuels and advancing the State-wide goal to produce 100% of our electricity from renewable energy sources by 2045.

The Public Utilities Commission (PUC) approved the 25-year power purchase agreement with Innergex in 2019 to deliver electricity to Hawaiian Electric from the project at $0.08/kWh. The project will also generate nearly 20% of the Island of Hawaii's baseload electricity requirements, resulting in avoided fossil fuel consumption of over 500,000 barrels of oil over 25 years.

The Hale Kuawehi solar and battery storage facility will consist of 30MW AC of photovoltaic panels on single-axis trackers plus 120MWh of battery energy storage across approximately 300-acres, located near Parker Ranch's industrial park, off of Mamalahoa Highway. The project will provide inflows through tax revenues for reinvestment in the Island and job creation. Innergex is currently developing its community benefits package and conducting outreach to local non-profit organisations.

"We are pleased to be working with Innergex to bring more renewable energy online for the Island and the State. This project aligns with our mission to support our Beneficiaries and improve the quality of life in our community," said Dutch Kuyper, President & CEO of Parker Ranch. "We look forward to sharing plans on additional renewable energy and sustainability initiatives that will further reduce fossil fuel consumption and CO2 emissions, helping to address the threats of climate change."

Parker Ranch is engaging in various approaches to curb carbon emissions as part of its strategic plan which focuses on generating value through sustainability and sustainable economic development.  In addition to previously modifying its ranching strategy to lower its carbon footprint, Parker Ranch is also actively pursuing reforestation and additional opportunities to expand clean renewable energy generation.

Alongside its renewables target, Hawaii is aiming to double local food production by 2030. A SWITCHing the paradigm white paper from Dr. Matthias Fripp, associate professor of electrical engineering at the University of Hawaii at Manoa, states:

"When framed as having to choose one goal over the other, the choice can become paralysing. However, in reality, the development of renewable energy, specifically solar photovoltaics (PV), and protecting Hawaii's agricultural land do not have to be at odds with each other."

Its analysis shows that the two can not only coexist but, at times, have a symbiotic relationship "that allows us to achieve these ambitious goals simultaneously".