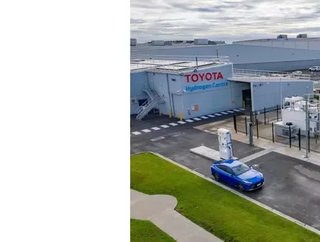 It's been a busy 24 hours in the rapidly evolving hydrogen sector as initiatives continue apace globally.

First up Loop Energy announced the shipment of its first unit of eFlow fuel cell modules to Ecubes, a developer of hydrogen electric systems for stationary power applications based in Slovenia. This is the first in a series of shipments under the previously announced agreement and marks Loop Energy’s first commercial shipment to the EU.

Under the terms of the agreement, Loop’s high fuel-efficient fuel cell modules are to be integrated with Ecubes’ proprietary Thermal Green Hydrogen Energy Storage solution Hydrogenium, which stores energy in solid matter with no pressurised vessels for hydrogen.

“Hydrogen is beginning to emerge as a solution of choice when it comes to decarbonization of the global diesel genset market and is widely expected to nearly double by 2027 from its reported 2019 base of $16.4 billion,” said Ben Nyland, President and Chief Executive Officer of Loop Energy.

Then the European Marine Energy Centre unveiled its collaboration with Highlands and Islands Airports Limited to decarbonise heat and power at Kirkwall Airport through green hydrogen technology. 2G Energy has been selected to deliver a CHP plant which generates heat and electricity of 100% hydrogen – the first one in the UK (click here).

Mark Holtmann, Managing Director of 2G UK, said it covers a variety of different gas types but hydrogen is "by far" the most exciting application to date. "Even though there are already 2G CHPs operating on 100% hydrogen around the world, we look forward to a strong and successful partnership with Doosan Babcock to deliver the first 2G 100% hydrogen CHP solution in the UK using our 'agenitor' range. We look forward to this project becoming a stepping-stone for many other industries to follow in the UK," he said.

“Globally, Toyota is committed to achieving zero CO2 emissions from its vehicles and plants under the Toyota Environmental Challenge 2050 and the commissioning of our hydrogen refuelling facility here today is an important step towards achieving that goal,” he said.

“By demonstrating the viability of renewably-produced hydrogen as an automotive and energy fuel through this project, Toyota and its partners in government and business are pioneering a cleaner, more sustainable future that will encourage the further acceptance of this technology.

He thanked "forward-thinking business partners" who will lease the 20 Mirai sedans it has shipped to Australia to prove that hydrogen and fuel cell vehicles can play an important role in helping to move us towards a more sustainable future.