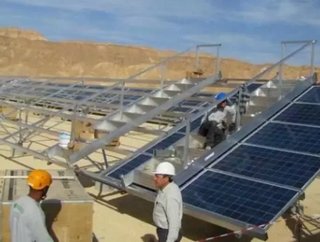 On Sunday&mdash;World Environment Day for those who didnt know&mdash;Israel officially launched development of the countrys first solar farm. Developer...

On Sunday—World Environment Day for those who didn’t know—Israel officially launched development of the country’s first solar farm.  Developer Arava Power announced that the medium-sized 4.95-megawatt solar farm is first of over 400-megawatts of new solar installations planned for construction in southern Israel.

The Arava Desert will serve as host to the new solar farm, providing renewable energy to the surrounding kibbutzim of Ketura, Lotan and Grofit.  The field will contain approximately 18,500 solar panels.

“Israel is in last place among industrial countries in solar energy development even though we should be leading the pack,” company co-founder and CEO Yosef Abramowitz says.  “At less than one percent [renewables], we are betraying our own energy security.  This is a down payment on the solar future of the State of Israel.”

Arava Power struggled for five years to initiate development of the solar farm, with government red tape slowing progress.  However, the project is just the first of some planned 45 future solar installations across the country.  14 other solar fields are currently being prepared for construction.

Israel has set a cap of 300-megawatts for medium-sized fields, like the Arava installation, despite an estimated 1,200-megawatts worth of applicable space and energy at the country’s disposal.  Larger fields, like the 40-megawatt project being planned by Arava Power across the street from the current field, are still pending government approval from Israel’s Finance Ministry.

According to Abramowitz, development is occurring at far too slow a pace, and of the over 600 license applications for solar project pending approval, only 16 to 20 are approved on a monthly basis. “It’s essentially a $20 billion market between now and 2020, and we’re announcing a $2 billion jumpstart,” Abramowitz added. “And the Treasury wants to freeze, block and cut? They’ve got to be kidding–where is the prime minister?”