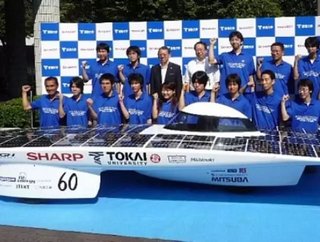 In one of the closest races in the event&#39;s history, Japanese Team Tokai crossed the finish line first in Thursday&#39;s 11th Wold Solar Challenge c...

In one of the closest races in the event's history, Japanese Team Tokai crossed the finish line first in Thursday's 11th Wold Solar Challenge car race. After a dramatic 3,000-kilometer (1,864 mile) trek, sidelined by wildfires and explosion, the team dedicated their win to the reconstruction of their tsunami-stricken nation and its future to follow after the nuclear power plant crisis.

After 32 hours and 45 minutes, the Tokai Challenger2 crossed the finish line with an average speed of 91.54 kilometers per hour. The Netherlands' Nuon solar car came in close second, while the University of Michigan came in third. Thirty-seven cars from 21 countries competed against each other, battling high temperatures and strong winds along the way.

Japan took the lead from the start and maintained its position throughout the race, running smoothly without any serious trouble along the way. Others were less fortunate. Team Solar Philippines experienced a battery explosion that caused its car to ignite.

The Panasonic Corporation, headquartered in Osaka, Japan, sponsored the Tokai team, providing HIT solar cells and high-capacity lithium-ion rechargeable batteries. Ideal for obtaining the most power within a limited space, the HIT solar cells are hybrids of single crystalline silicon surround by thin amorphous silicon layers. Over 2000 compound cells mounted on the three-wheeled vehicle enabled the car to produce a higher output of energy in comparison to silicon cells.

“Our solar-car design was superior, and we were also lucky; Only one puncture, and one power-tracking circuit need replacing,” according to Hideki Kimura, a professor in Tokai University's department of electrical and electronic engineering.