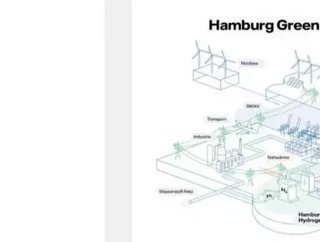 Vattenfall, Shell, Mitsubishi Heavy Industries and Hamburg's municipal heat supplier Hamburg Wärme have signed a Letter of Intent to create one of the world's largest electrolysers in the Port of Hamburg, which would make green hydrogen from 2025.

The new electrolyser at Europe's third largest port will be built on the site of the former Moorburg coal-fired power plant, with a proposed capacity of 100MW - and serve as a catalyst for a future Green Energy hub.

The Hamburg metropolitan region continues to take a lead in the European green hydrogen economy - already scoring a high share of renewable energies.

In the coming years, Germany will be investing €9 billion in the development of a green hydrogen economy. Forecasts predict that the hydrogen economy in Europe will generate 5.4 million jobs and 800 billion euros in annual sales by 2050.

The partners intend to apply for funding under the EU program “Important Projects of Common European Interest” (IPCEI). This should take place in Q1 2021 with the submission of a first outline of the project.

Numerous potential customers for green hydrogen are located near the site, thus enabling the project to cover the entire hydrogen value chain - from generation to storage, transport and utilization in various sectors.

Its commercial operation was terminated after the power plant won a bid in the auction for the nationwide coal phase-out in December 2020. A decision by the transmission system operator on the system relevance of the plant is expected in March.