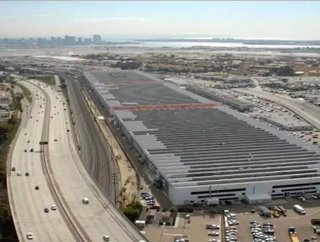 The Navy's largest contiguous rooftop solar array begins its first full year of generating electricity at the Space and Naval Warfare Systems Command (SPAWAR) complex, a headquarters for high-tech military command, communications and surveillance in San Diego. SolarWorld, the largest US solar manufacturer, provided the 1.3 megawatts worth of solar panels.

“It is clear that the U.S. Department of the Navy, Stronghold and SolarWorld share the same commitment to reducing the country’s carbon footprint and producing green energy in ways that lives up to the highest standards of safety and quality,” Chuck Gossage, executive vice president of Stronghold Engineering, told Solar Thermal Magazine.

In addition to many other projects, the project represents the efforts being made on behalf of the military to conserve energy and reduce reliance on foreign fuels. SolarWorld's solar panels have also been employed at military bases in other parts of the US and overseas, including Pear Harbor in Hawaii, the Marine Corps Air Ground Combat Center in Twenty Nine Palms, Calif., Buckley Air Force Base in Aurora, Colo., and a naval base in Guam.

“For many years, the Department of Defense has been on the leading edge of the federal government’s efforts to tap solar technology to reduce energy consumption, promote sustainability and lower the cost of doing business,” Kevin Kilkelly, president of SolarWorld Americas, told Solar Thermal Magazine. “By selecting high-quality American manufacturers and installers to supply, design and construct DOD solar projects, the U.S. military is making even greater strides to increase its sustainable energy independence.”