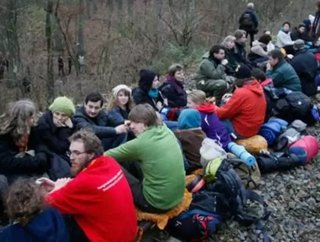 Police officers detained 1,300 out of an estimated 5,000 sit-in protesters trying to block a train carting nuclear waste from France to Germany Sunda...

Police officers detained 1,300 out of an estimated 5,000 sit-in protesters trying to block a train carting nuclear waste from France to Germany Sunday.

Those who resisted were temporarily detained, while the rest remained for several hours. A total of 51 officers have been injured since Friday, clashing with groups who hurled stones and fireworks, police told the press. Activists claim around 150 injuries as police broke up protests with batons and tear gas.

As Germany moves to shutdown all of its nuclear plants by 2022 in light of the nuclear disaster at Japan's Fukushima-Daiichi power plant in March, the annual shipment of nuclear waste from France has also been a focal point of anti-nuclear advocates. Activists claim the containers and storage facility are extremely unsafe.

Bracing the overnight cold in an attempt to stop the 11 containers of reprocessed nuclear waste from reaching its final destination, thousands chained themselves to the railway tracks Sunday night. Monday morning, police officers were able to remove hundreds of protesters from the railway.

While protesters were only able to slow down the transportation of the nuclear waste, their message was heard throughout Europe. Following new laws on carriage of radioactive materials, the shipment is the final of 12 shipments between France and Germany and most likely the last.