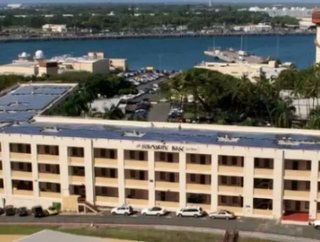 Pearl Harbor is a sore spot for patriotic Americans. The historic navy base was the site of the infamous Japanese air raid that brought the United Stat...

Pearl Harbor is a sore spot for patriotic Americans.  The historic navy base was the site of the infamous Japanese air raid that brought the United States into World War II.  However, a new “light” is being shed on the historic landmark as 2.4 MW worth of solar panels are adorning the rooftops of various military facilities throughout Pearl Harbor.

Five roofs in total at the Navy and Air force joint base—renamed Joint Base Pearl Harbor-Hickam—are covered with over 1,000 SolarWorld photovoltaic panels.  The panels will together produce more than 3.4 gigawatt-hours of electricity per year.  That’s enough power to run 440 average homes.

The project is part of a greater defense department plan to convert military bases to use renewable, sustainable and locally sourced products.  The solar rooftop installation cost around $15 million.

“Whenever they have a chance at one of their bases to install renewables, they do it,” says Ben Santarris, spokesman for SolarWorld—the company that provided the solar panels. “I think there are more and more projects like this, and there will be more and more.”

One of the buildings outfitted with a new solar rooftop is the historic Bachelor Enlisted Quarters.  Built in 1927, the building survived the aerial bombardment on the base when Japanese forces attacked in 1941.

Santarris adds, “I count them among a series of iconic solar projects this year that, to me, herald a dawning solar prime time.”