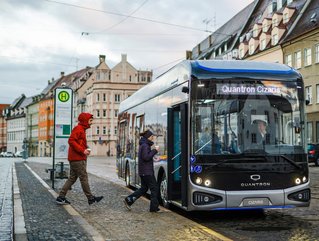 Quantron is preparing to launch its 12m-long Cizaris electric bus initially in markets across Eastern Europe, the Middle East, Scandinavia and Southern Europe.

The new model from the Augsburg-based company - a composite of city (CI), zero emissions (Z) and Greek for 'the best' (Aris) - has been developed by Asian manufacturer EV Dynamics. It can hold up to 95 passengers, depending on the battery package, and the Cizaris 12EV will be followed by a fuel cell drive (Cizaris 12H) in 2023.

With between 242 and 424kWh of selectable battery capacity, CATL's roof-mounted-only battery packs are fast-charged with 65 to 150kW of direct current (DC) in two to five hours. In the medium-heavy eSORT 2 cycle, this energy is sufficient for 220 to 370kms (220 to 370 mile) circulations at a do-duty (DoD) charge rate of 10%.

It provides an output of 145/245 kilowatts (nominal/maximum) and a maximum engine torque of 1,055/3,329 newton meters, which is developed without any gear changes. With the introduction of the fuel cell version, an even more powerful powertrain will be used.

A Valeo heat pump/air conditioning unit with a cooling capacity of 33 kW and antiviral filters ensure good ventilation on board and a novel feature is an elaborately perforated aluminium ceiling with indirect lateral light.

A fully digital instrument cluster from Actia provides information on all important processes and status messages, and is complemented by high-resolution camera mirror monitors - it is one of the few city buses to offer a separate front observation camera with a large monitor above the cockpit.

Optimum fire protection is ensured in the rear compartment, in the battery modules and other high-voltage components by means of fire detectors (temperature/gas sensors) and separate powder extinguishing cartridges, even though the LFP batteries are considered by all experts to be largely "incombustible".

The warranty terms are two years for the entire vehicle, and eight years or 3,000 charging cycles (or 80% charging capacity, whichever comes first) for the important batteries. Quantron said it can call on a network of 700 service providers in Europe.

Due to the special requirements of the German market, such as the VDV specifications regarding the driver's workstation and other systems, the market launch in Germany, Austria and Switzerland will take place in the second half of 2022.

By signing the Drive to Zero pledge, the Volvo Group joins Drive to Zero's current network of 130-plus manufacturers, fleets, governments, infrastructure providers and other market leaders committed to accelerating zero-emission commercial vehicles.

Pledge partners agree to work strategically and collaboratively to support and grow mechanisms to speed the early market for zero-emission commercial trucks and buses. Drive to Zero's goal is to drive market viability for zero-emission commercial vehicles across key segments in urban communities by 2025 and achieve full market penetration by 2040.

Volvo Cars and Northvolt have selected Gothenburg to establish a new battery manufacturing plant which will commence operations in 2025, create up to 3,000 jobs and complement the planned R&D centre that both companies announced in December, as part of an investment of approximately SEK30bn.