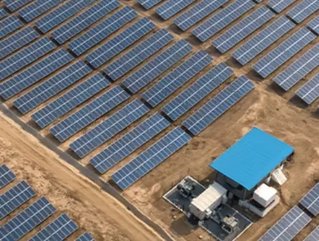 ReNew Power is on track to reach 18GW operating capacity by 2025 after commissioning the 300MW SECI-6 solar project, raising its total capacity to 7.4GW.

Driving this growth is a record installation of 1.5GW of renewable energy projects this fiscal year (FY22 YTD), despite challenges related to COVID-19 and supply chain disruptions. In FY21, ReNew finished the year with an operating capacity of 5.6GW and is targeting 8.2GW by the end of FY22.

The bulk of ReNew's organic capacity addition that led it to surge past the 7GW landmark is located in the states of Rajasthan and Gujarat. The 1.5 GW capacity addition in the current fiscal year comprises more than 1.3GW of utility scale solar projects. These include 1.2 GW in Rajasthan, 105 MW in Gujarat, and 20 MW in Maharashtra. In wind projects, over 150MW has been installed, including 136MW in Karnataka and 22 MW in Gujarat.

All these capacity additions in FY22 are expected to offset over 75,000 mn tCo2e of carbon emissions cumulatively. Around 1.05 GW of this organic capacity addition has a PPA with the Solar Energy Corporation of India, an entity owned by the Government of India, for 25 years.

Chairman and CEO of ReNew, Sumant Sinha - recently awarded 'Chief Trailblazer of the Year' by S&P Global Platts Global Energy Awards - said ReNew continues to be at the heart of India's transformation as a clean energy leader.

"The major organic addition of 1.5GW of renewable energy projects this fiscal year and the fact that we have crossed 7GW of commissioned capacity shows we are well on track to achieve our aspirational goal of 18 GW by FY25," he said. "We will further intensify our efforts to help India achieve its climate goals, including meeting half of its energy needs through renewables, and also develop green hydrogen."

The company's expansion of its operational capability comes as India looks at 500 GW of non-fossil fuel energy capacity by 2030 and by the same year, reducing total projected carbon emissions by one billion tonnes, as announced by Prime Minister Narendra Modi at the COP26 Glasgow summit.