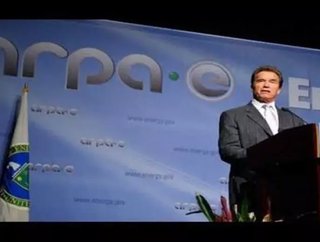 The American Council On Renewable Energy (ACORE) will celebrate the former Governor of California, Arnold Schwarzenegger, as the decade&#39;s leader in...

The American Council On Renewable Energy (ACORE) will celebrate the former Governor of California, Arnold Schwarzenegger, as the decade's leader in renewable energy at its 10-Year Anniversary Celebration tonight in Washington, DC. Others who will be recognized include Senator Mark Udall, Jeffrey Immelt and Walmart for contributions made towards clean energy in America.

Schwarzenegger's talk will be on “America's global competitiveness in the clean energy economy.” In the past, Schwarzenegger has called on both political parties to focus on the undeniable benefits of a green revolution and make clean energy a nonpartisan issue.

In a speech at the ARPA-E Energy Innovation Summit in March, Schwarzenegger said, “There is a disconnect between what is happening and what is being debated,” he said. “For too long, we have been fighting over greenhouse gases and global warming. Where is this getting us? What has this brought us?”

Calling on both parties to come together, Schwarzenegger believes the country is approaching a new era of American competitiveness, referring to leadership in renewable energy and green technologies.

“It is absolutely clear that the green economy is a way to keep America competitive abroad,” he also said. “Clean energy is the next great wave of innovation.”