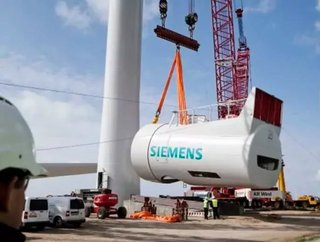 Siemens AG is one of the premier manufacturers of large-scale wind turbines, right in ranks with the likes of GE and Vestas. The company has now annou...

Siemens AG is one of the premier manufacturers of large-scale wind turbines, right in ranks with the likes of GE and Vestas.  The company has now  announced the successful deployment of its newest giant wind turbine, and it has one very unique quality the others can’t boast: it is super lightweight.

The SWT-6.0-120 is a direct-drive 6-megawatt turbine with rotor diameter of 393 feet.  The combined weight of the rotor and nacelle (outer turbine casing) is less than 350 tons.  Siemens claims the lightweight design sets a “low-weight standard for large offshore machines.”

"In tendency large wind turbines have always been heavier per megawatt than small ones," Henrik Stiesdal, Siemens Wind Power's chief technology officer said in a release. "The SWT-6.0-120 breaks this rule having a weight per megawatt similar to that of many turbines in the 2- to-3-megawatt range."

The SWT-6.0-120 is only Siemens’ third turbine design, and is its first venture into the giant wind turbine category of the 6 MW range.  Siemens claims the turbine will lead to "a significant reduction in the cost of energy for offshore wind power plants," not only in the cost of the turbine, but in supporting structures and towers.

Siemens’ SWT-6.0-120 has been deployed for testing in the offshore wind farm in Hovsore, Denmark.  Another SWT-6.0-120 will be installed within the year and both turbines will undergo extensive commissioning and trial operation before put to market in 2014.