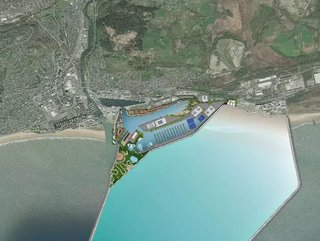 A £1.7 billion project proposed for Swansea's waterfront will include a newly-designed tidal lagoon, featuring modern underwater turbines generating 320MW of renewable energy from the 9.5km structure.

The lagoon is part of the larger proposed Blue Eden project that's being led by Bridgend-based DST Innovations and a number of business partners, with support from Swansea Council and Associated British Ports. Subject to planning consent, work could start by early 2023.

Made possible by funding from the private sector, Blue Eden will be delivered in three phases over 12 years. The project also includes:

Blue Eden will be sited to the south of the Prince of Wales Dock in the SA1 area of Swansea. All the project's buildings and facilities, including the eco-homes, will be located alongside the lagoon. The project will create over 2,500 permanent jobs and support a further 16,000 jobs across the UK, while creating additional jobs during construction.

Renewable energy produced on site will power the entire Blue Eden development, including businesses and a mixed development of affordable housing, assisted living areas and luxury apartments. Due to the innovation on-site, each home will have up to 20 years' renewable energy and heat provision included with the sale of the properties. The announcement comes as world leaders prepare to gather in Glasgow later this week for the COP26 summit to tackle climate change.

Tony Miles, Co-founder and Chief Executive of DST Innovations, said: "Blue Eden is an opportunity to create a template for the world to follow - utilising renewable energy and maximising new technologies and thinking to develop not only a place to live and work, but also to thrive."

The project has been developed following discussions based on a vision put forward by a regional task force led by Swansea Council. Cllr Rob Stewart, Swansea Council Leader, said: "We are aware now more than ever of the need to develop renewable energy supplies to provide sustainable and affordable electricity to families and businesses.

"Blue Eden will put Swansea and Wales at the cutting-edge of global renewable energy innovation, helping create thousands of well-paid jobs, significantly cut our carbon footprint and further raise Swansea's profile across the world as a place to invest.

"I'm delighted that an international consortium led by a Welsh company has developed our Dragon Energy Island vision into a ground-breaking project that delivers so many benefits and builds on the council's ambition to become a net zero city by 2050.

"This project truly is a game-changer for Swansea, its economy and renewable energy in the UK, and crucially it can be delivered without the need for government subsidies."

Julie James, Member of the Senedd for Swansea West, said it was exciting to see this project moving forward at such an important time for Wales and the world. "It will bring cutting-edge innovation and research, thousands of high-quality green jobs, excellent low carbon homes and abundant renewable energy. Swansea has one of the highest tidal ranges in the world, and this scheme will allow us to utilise the energy it provides to support our planet for future generations."

Renewable energy produced on site will power the entire development, including businesses and a mixed development of affordable housing, assisted living areas and luxury apartments.

Andrew Harston, Director of Wales and Short Sea Ports for ABP, said it is engaged in discussions around the Blue Eden project which could deliver renewable energy, new homes and skilled jobs. This innovative prototype has the potential to be a first for the UK and bring Britain closer to our net zero target.

"This is an exciting project. If delivered alongside ABP's own vision for South Wales, the Blue Eden Project could put the region at the very forefront of decarbonisation and digitalisation in Wales and at the vanguard of the energy transition journey and zero carbon living in the developed world."

Senator Joe Manchin, Senator for West Virginia and Chairman of the Senate Energy and Natural Resources Committee, said: "The pioneering work being carried out by DST and Batri in both Wales and West Virginia, USA, is a shining example of global collaboration working at its best, delivering innovative solutions that provide substantial contributions to both our war on climate change, and sustaining jobs in our communities."

In a joint statement, Henry Dixon, Chair of the Tidal Range Alliance, and Simon Hamlyn, Chief Executive of the British Hydropower Association, said: "The innovative and exciting Blue Eden project underlines the value of reliable renewable energy generation from a tidal lagoon.

"At a time when future energy security and stability is being questioned, the Tidal Range Alliance welcomes the launch of DST Innovation's project. Alongside other schemes along the west coast of the UK, tidal range power generation has the potential to supply 5% to 10% of the country's energy needs, reliably and predictably, unlike other intermittent renewables such as wind and solar."