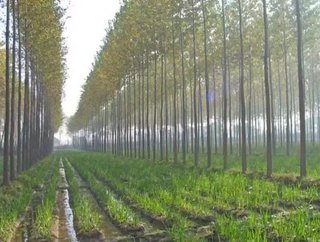 While most biofuel research has been focused on corn-based ethanol, some are turning their attention to the potential of making liquid fuel out of tree...

While most biofuel research has been focused on corn-based ethanol, some are turning their attention to the potential of making liquid fuel out of trees. The Department of Agriculture has recently dedicated a slice of its $40 million biofuel research grant budget to expand the research at Universities leading the way.

The poplar trees under evaluation are already used in energy production, burned at power plants to create steam or generate electricity. More recently, researchers have taken notice of the advantages poplar trees possess over other common forms of cellulosic feedstock that could be used for the production of biofuels.

For one, they can be vegetatively propagated and are extremely efficient at photosynthesis, meaning they will grow rapidly in relatively short spans of time. They are also less management-intensive in comparison to annual crops, such as corn and soybeans. Furthermore, the trees could be harvested at any time of the year, unlike row crops.

U.C. Davis expects to plant around 400,000 acres of trees in conjunction with five refineries over the next year in their investigation of using poplar trees for aviation fuel, diesel and gasoline. Lead researcher and professor of biological and agricultural engineering at the U.C. Davis Energy Institute, Bryan Jenkins, said he will also keep the economic and environmental impacts of the study in mind.

“When a farmer stops growing corn or pasture or pine trees, and starts growing poplar trees on that land instead, that change may affect soil health, regional greenhouse gas emissions and the over profitability of the farm enterprise,” said Jenkins.

At the University of California Riverside, researchers have discovered clues that could make poplar trees a viable candidate for biofuels as well. Thus far, the team has pinpointed certain trees that produced remarkably high sugar yields without pretreatment, which is a typical prerequisite in biomass to biofuel production, leading to an ultimate reduction in costs of production. From their findings, it is believed that the trees could be grown for commercial testing and biofuel production.

Other researchers at Purdue University are working on developing genetically modified poplar varieties that alter compositions and contents of the trees to overcome obstacles of extracting sugars from the trees.