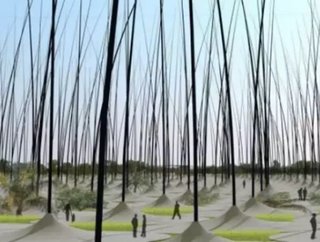 Masdar/WINDSTALK Finding art in the renewable is a relatively new concept, but designers all over the world have jumped at the chance to create their o...

Finding art in the renewable is a relatively new concept, but designers all over the world have jumped at the chance to create their own unique version of the wind farm. One such design is from New York based Atelier DNA, a team who created the concept behind “Windstalk,” an aesthetically pleasing development designed specifically for the Land Art Generator Initiative, and Abu Dhabi’s Masdar City.

The project earned second place at the inaugural event that proposed functional clean energy producers could also be pieces of art. “For this project we entered a design competition for a specific site for a specific program, which was to create a public art that also generated electricity in some sustainable way,” said the project’s founding architect Darío Núñez-Ameni.

More than 1200 carbon fiber reinforced resin poles – reminiscent of lengthy reeds standing 180 feet high – are anchored to cement platforms 33-66 feet in diameter. These lifelike reeds consist of piezoelectric ceramic discs, where electrodes are connected by cables that run lengthwise of the pole. The LED lamps flicker in the night and sway in the wind, generating enough energy to power a neighborhood, while easing the concerns of neighbors who claim typical wind farms are wreaking havoc on the city ambiance.

Think your wind farm is the coolest of them all? Try building one in Antarctica. That’s exactly what New Zealand’s Scott Base and the United States McMurdo Station did two years ago when these location bases began the concept design behind Ross Island’s wind farm. Two years later with the help of New Zealand’s Meridian Energy, Antarctica New Zealand and National Science Foundation, Enercon turbines were installed on Crater Hill, one of the coldest areas in the world. Enercon turbines were installed specifically to meet the extreme climate conditions of the site where little repair is needed and even during under 40 degrees winds, the turbines are still working their hardest. In such extreme conditions, the construction team was forced to work during the summer – a minimum of just four months – when the sun is out 24 hours a day. In such an environmentally sensitive area, the trouble wasn’t just accessing the site to build in 69 mile per hour winds, but to do it in temperatures of -35F to 45F. In 2010, the project was completed and today Scott Base and McMurdo Station operate through a transmission grid, reducing the diesel fuel level by 11 percent and CO2 greenhouse gas emissions by more than 1200t.

Europe and the United States have done offshore energy, but Hammerfest Strøm was the first to create a wind farm 100 meters under the sea. As the first “wind” farm under the sea, it’s a push to say that these turbines are generating electricity from the same environment as those above ground, but through the 300kw prototype it’s energizing similar electrical forces. Installed in 2003, these farms use both potential energy (from the head of water) and kinetic energy. Tranquil days don’t matter underwater either, where tidal power provides a constant energy source.

After four years of testing, Hammerfest Strøm expects a wind farm of 20 tidal turbines to be installed before the end of the year in Scotland’s Pentland Firth and the Sound of Islay, and Ireland’s North Antrim. The company constructed the original tidal turbine prototype, the HS300, in 2003 and tested it for four years. After its success of connecting to the power grid through the conversion of kinetic energy to electricity, Hammerfest Strøm welcomed the HS1000. The second device handles just as much energy and is set to be fully installed in sites by the end of the year.

In September 2010, the world’s largest offshore wind farm was completed just 12 km off Foreness Point near Kent. The project, which includes 100 Vestas V90 wind turbines, was developed by renowned Swedish wind operator Vattenfall, who have helped supply Europe with some of the largest wind farms in the country. Thanet has been attracting the attention of environmentalists since 2008 when Vattendfall first acquired the land, as it’ll generate enough to power 200,000 homes a year – enough to ease the Government’s mindset about meeting their renewable energy target. It might not seem like such an audacious project while standing at the harbor in Kent, but swim just seven miles offshore and the 100 turbines will overtake the ocean landscape. In full capacity these massive offshore wind turbines can power half of Kent, a number that impresses whether or not residents’ energy bills have gone up in price. While not innovative in terms of aesthetics, Thanet is just one of many wind farms in development over the next decade.