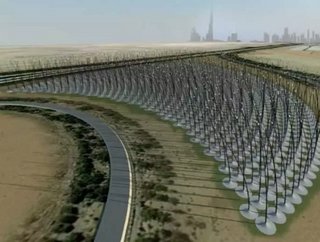 A design firm from New York, Atelier DNA, has developed a concept that uses cattail like stalks instead of traditional turbine blades for harnessing t...

A design firm from New York, Atelier DNA, has developed a concept that uses cattail like stalks instead of traditional turbine blades for harnessing the power of wind. Planned for the city of Masdar, being built just outside of Abu Dhabi, the “Windstalk” project came in second in the Land Art Generator competition, generating renewable energy in an artistic way from a plethora of international submissions.

Traditional wind turbines' biggest downfalls include noise pollution, inadvertent bird death trapping and general difficulties in installing such large structures. Atelier's new stalk design generates electricity when the wind sets them waving—minus the dreadful noise or danger posed to birds. Another advantage will be the density at which the stalks will be able to be built whereas turbines need to be spaced about three times the rotor's diameter from each other.

The pilot project calls for 1,203 stalks at 180 feet high each, anchored by concrete bases that are between 33 and 66 feet wide. With each stalk containing alternating layers of electrodes and ceramic discs that generate a current under pressure, the discs compress as they sway, creating a charge.

“The idea came from trying to find kinetic models in nature that could be tapped to produce energy,” explained Atelier DNA, founding partner Darío Núñez-Ameni, to Discovery. “Our system is very efficient in that there is no friction loss associated with more mechanical systems such as conventional wind turbines.”

Each base contains a torque generator to convert kinetic energy into energy using shock absorber cylinders. An LED lamp glows at the top of each stalk when the wind is blowing.

“Windstalk is completely silent, and the image associated with them is something we're already used to seeing in a field of wheat or reeds in a marsh. Our hope is that people living close to them will like to walk through the field -- especially at night -- under their own, private sky of swarming stars,” Núñez-Ameni told Discovery.

The wind farm is expected to have a comparable output to that of a conventional wind farm covering the same area of land.