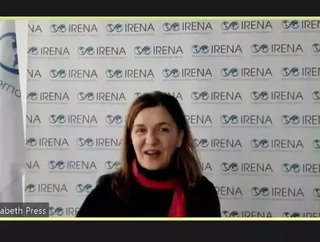 Women employment in renewables ahead of oil and gas but more needs to be done to encourage females to the sector, discusses IRENA panel...

Women account for 32 percent of jobs in the renewables sector, around 10 percent ahead of oil and gas but 12 percent behind average employment rates in the global economy, according to an IRENA presentation and panel discussion held on Monday to coincide with International Women's Day 2021.

Monica Oliphant, Former President of the International Solar Energy Society, said while women were not at "equal pay for equal work" the situation is getting better. Rabia Ferroukhi, Director - Knowledge, Policy and Finance IRENA - which has a 50-50 senior team gender balance - said opportunities were rising in tandem with the boom in renewables, which attracted 11.5 million jobs in 2019, 3.8 million of which were in solar PV, and up to 42 million jobs could be needed by 2050.

Walburga Hemetsberger, CEO, Solar Power Europe, said previously it had no women on its board and now has two. To raise awareness in the industry, she said it will launch its first Gender Balance Awards.

Carol Weis, Co-Founder, Remote Energy, highlighted the importance of STEM education and said one challenge is there are "not as many women in technical departments". Alongside training and skills development, companies much attract and retain talent in the sector through policies and continue to challenge cultural and social norms.

A key challenge is shifting mindsets and addressing harmful stereotypes about job roles and advancement opportunities that unnecessarily hold women and men back across the talent pipeline, according to Joel Couse, Special Advisor to the IEA. The share of women in leadership positions at the IEA has grown from 16% in 2015 to 38% today.

Laura McGee, founder and CEO of Diversio, a Canada-based company that provides an intelligence platform to measure, track and improve diversity and inclusion, said that the “energy sector is in the middle of the pack compared to some sectors, and could achieve rapid progress by learning from other industries.” Data-driven diagnostics are critical for avoiding missteps and allocating resources to targeted pain points, she added.

Elsewhere across the industry to mark International Women's Day: