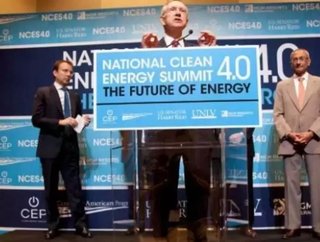 Hybrid solar power plants have become a hot new addition to the energy generation landscape this year.  Several natural gas solar hybrids have been coming online across the globe, providing consistent energy generation powered by solar during daylight hours, and natural gas during the night or on cloudy days.  Enel Green Power North America has now announced its plan to take this same principle and apply it to geothermal energy, developing the world’s first solar geothermal hybrid power plant.

The 24-megawatt plant will utilize 80,000 polycrystalline photovoltaic (PV) panels in conjunction with traditional hydrothermal technology.  The plant is going to be constructed in Churchill County, northern Nevada.

Geothermal Energy could get Boost from Congress

“All these things are going to be necessary as we move into renewables,” says Energy Secretary Chu. “This is an incredible new technology that can be used across the country… We have the opportunity to lead the world in this market.”

Senator Reid states, “This is a debate we can win publicly. This is an energy revolution that other countries have embraced with arms wide open.”

Construction on the solar geothermal hybrid plant is expected to take a full year to complete and the project will employ roughly 250 Nevada residents.  The site has already installed the first of a reported 7,000 support poles to hold the solar PV panels in place.

The energy generated by the plant will be sold to local utility NV Energy, and Enel President Venturini believes this plant will be the first of many to be built across the U.S.  Enel is also in the early stages of developing a concentrating solar thermal geothermal hybrid test plant in the same location.