Yingli to be Renewable Energy Partner with U.S. Soccer 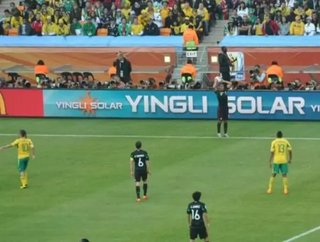 Soccer&mdash;or &lsquo;football as the rest of the world calls it&mdash;is gaining respect in the United States as both the mens and womens national te...

Soccer—or ‘football’ as the rest of the world calls it—is gaining respect in the United States as both the men’s and women’s national teams have made tremendous World Cup showings in recent years.  Now, Chinese solar power company Yingli Green Energy wants in on the action and plans to become the first renewable energy partner of U.S. Soccer for the U.S. Men’s, Women’s and Youth National teams.

The agreement between Yingli and U.S. soccer is scheduled to last through the end of 2014, although financial terms have not been disclosed.  The partnership will officially launch on August 10 when the U.S. Men’s National Soccer Team plays Mexico in Philadelphia.

“Soccer is the world’s most popular game and we are extremely excited to be partnering with U.S. Soccer, an organization that has achieved tremendous success and similar global recognition in recent years,” says Robert Petrina, managing director of Yingli Green Energy subsidiary Yingli Americas, said in a statement. “We consider this association to be the best platform for building solar energy awareness across the country. We recently announced that we are on track to capture 15% of the North American solar market in 2011, and today we’re reinforcing our commitment to build a lasting brand and a recognizable local level.”

Considering that China pretty much owns the U.S. anyway, this partnership seems like a logical move.  Just as the U.S. begins making its mark internationally in a sport that it has been slow to embrace, China comes in to dominate investment, just like it has with pretty much every other sector in the country.  The partnership is a smart way for Yingli Green Energy to come in and take over the U.S. solar market, using America’s newfound love for soccer as a catalyst.  However, I’m not seeing any U.S. solar companies waiting in line to invest in the sport, so perhaps it’s just as well that Chinese firms bring money into the country.  After all, with the economy in shambles, it may just be our debt holders—the Chinese—who see us through… again.