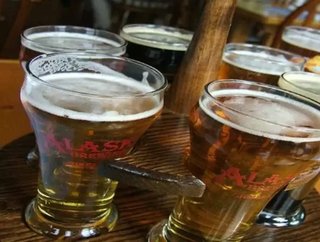 Alaskan Brewing Co is going green, turning to an alternative energy source readily available right under its own roof: beer.

Using a boiler system, the Juneau-based beer maker uses a $1.8 million furnace to burn the company's wasted grain accumulated from the brewing process into steam to power the facility's operations. Whereas most breweries operating in the Lower 48 would typically send spent grain to nearby farms and ranches to be used as animal feed, there are less options for discarding the grain in Alaska where only 680 farms exist in the entire state (as of 2011).

As the brewery expanded in the mid-1990s, all that excess grain started becoming a problem. Some of it was shipped down to the Lower 48, but drying and shipping the grain was an intensive and expensive process. Not to mention, for every $60 the brewery made on a ton shipped to the Lower 48, it cost them $30.

"We had to be a little more innovative just so that we could do what we love to do, but do it where we're located," Alaskan Brewing co-founder Geoff Larson told The Associated Press.

Forced to get a little more creative to turn a profit, Alaskan Brewery contracted with a North Dakota company to construct a unique boiler system through a half million dollar grant from the federal Rural Energy for America Program. In about a month, the system is expected to be fully operating and offsetting the company's annual energy costs by about 70 percent, or $450,000.

Anheuser-Busch InBev has reportedly told The Associated Press that the company, too, is looking for new technologies applicable to its operations. Spent grain from the beer giant is currently being repurposed at local farms, and it is employing bio-energy recovery systems in most of its US breweries.