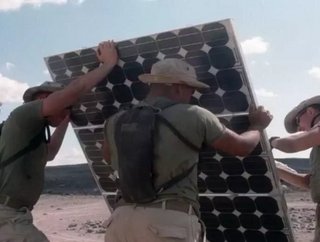 Contrary to popular belief, the US military isn&#39;t just fighting to secure oil interests around the world. As the largest consumer of fuel and ener...

Contrary to popular belief, the US military isn't just fighting to secure oil interests around the world. As the largest consumer of fuel and energy on the planet, the US Armed Forces, if anyone, knows the importance of reducing the nation's dependence on fossil fuels. With thousands of men risking their lives in fuel convoys in Afghanistan and Iraq, improving energy efficiency goes beyond reducing the force's carbon footprint; it's about protecting the troops and improving operations. From that perspective, it's hard to understand the politicization of "green."

The military is arguably clean energy's biggest advocate, and, due to its size and influence, will play an integral role in the future of energy in the country as a whole. The DoD's investment in green technologies could essentially act as the catalyst the industry needed to reach full commercial potential.

The Armed Forces have discovered significant tactical benefits in the use of more fuel-efficient vehicles, tools and generators, especially in remote locations around the world. At home, military bases are installing solar power, electric vehicle charging stations and making energy efficient retrofits across the country. Hybrid and fuel cell systems are being developed and tested for improved combat operations. By 2025, the DoD will source 25 percent of its power from renewable energy.

At a time when energy security is a high priority for the country, the US Army recently opened a one-of-a-kind laboratory to further pursue its efforts in efficient, clean energy technologies. The Ground Vehicle Power and Energy Laboratory (GSPEL) near Detroit, the nation's automotive capital, will work on improving fighting capabilities through the development of fuel cells and hybrid systems. The 30,000-square-foot facility, equipped with eight separate labs, will enable unprecedented ground vehicle testing and evaluation capabilities for the Army and its partners.

“The work done at the GSPEL will make our Soldiers’ loads lighter, reduce their energy requirements, and reduce the number of Soldiers we put into harm’s way to supply energy,” commented the Honorable Dr. Joseph Westphal, Under Secretary of the Army. “This facility will not only make us more efficient and save resources, but will save lives in combat as well.”

The building's Power and Energy Vehicle Environmental Lab (PEVEL), one of the world's most unique test chambers, can simulate temperatures ranging from minus 60 to 160 degrees F, humidity levels of up to 95 percent, wind speeds of up to 60 mph and a variety of terrain. Without ever leaving home, the Army can now perfectly simulate “a scorching desert day in Afghanistan or a bone-chilling day in Antarctica.”

With one incident resulting from every 46 resupply convoys in Afghanistan, the lab will allow researchers to make adjustments to its vehicles with life-saving implications.

“About 80 percent of the convoys that are traveling on the roads of Afghanistan right now are carrying fuel, and all of those Soldiers are now exposed as they move in those convoys on those dangerous roads, and they’re exposed to improvised explosive devices,” commented LTG Raymond V. Mason, Army Deputy Chief of Staff for Logistics in a statement. “We’ve got to reduce those convoys and make our commanders more flexible and adaptable, and cut our energy costs. We need to find ways to save energy and, most importantly, put our Soldiers at less combat risk. This lab is where we will do that. We’re counting on this lab to drive energy innovation to demonstrate to the American people that the Army team — and the other services as well — are good stewards of our precious energy resources.”

Along with the opening of GSPEL, the Army announced its plans for a “Green Warrior Convoy” next year, which will serve as a road test for its newly developed energy efficient equipment. The convoy will stop at schools, colleges, communities and military facilities to demonstrate advances in fuel cells, hybrid systems, battery technologies and alternative fuels—the technologies that will not only help lead troops to victory abroad, but also win the fight for clean energy technologies for Americans at home.