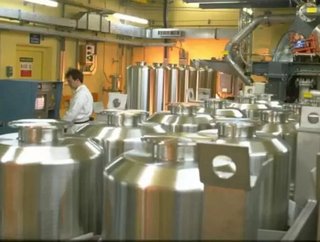 Nuclear fission reactors have been providing various countries throughout the world with relatively safe and clean energy for the better part of the la...

Nuclear fission reactors have been providing various countries throughout the world with relatively safe and clean energy for the better part of the last half-century.  However, opponents to nuclear argue that it is not a “clean” energy due to the highly radioactive waste byproduct that nuclear reactors produce, and it is not “safe” due to the risks involved in meltdown situations like that in Japan recently.  Storage facilities have contained nuclear waste for decades, but are a security risk in themselves.  As nuclear waste increases, storage capacity decreases, and while electricity consumers may love the cheap nuclear energy powering their lives, no one is excited by the prospect of welcoming a new nuclear waste storage facility anywhere near their community.

French nuclear energy company Areva has found a solution, and is pressuring the United States to adopt its nuclear waste recycling technology. Jacques Besnainou, chief executive of Areva Inc. is working to persuade U.S. utilities companies to invest in recycling spent nuclear fuel, stating that the company will "advocate much more loudly for a recycling center in the U.S,” adding, “We are going to be much more vocal by the end of the year."

Just last month, the Blue Ribbon Commission on America’s Nuclear Future confirmed that the U.S. would need to develop one or more temporary nuclear waste storage facilities as current facilities are reaching their maximum storage capacity.  Besnainou states in regard to the findings, "I don't believe that any communities in the U.S. would ever accept long-term centralized storage."

Besnainou believes that nuclear waste recycling facilities, on the other hand, would be welcomed by communities since they will create a new employment base.

Finland Lands Funds to Reduce Landfill and Fuel the Land

However, the main deterrent to wide-scale acceptance of nuclear waste recycling—which for the most part seems like a smart idea—is of course price point, as well as added security risks.  While Areva’s nuclear waste recycling technology produces nuclear fuel that can be used to once again run reactors, it is far more expensive than traditional non-recycled fuel.  Plus, the recycling process utilizes plutonium, which creates a whole slew of security risks and measures that would need to be implemented in such a facility.

Steven Kraft, a senior director at the Nuclear Energy Institute, remarks on Besnainou’s proposals, stating, "It's a great idea… I think recycling is something that we're going to have to do in this country."

In any case, it would take time to construct such a recycling facility, and funding would likely become a taxpayer or utility consumer’s burden, although current fees added to nuclear power utilities bills could be diverted to pay for such a facility.  Temporary storage facilities, nonetheless, will likely be installed somewhere in the U.S., but location is yet to be determined.  Will your community be the next to play host to a stockpile of radioactive nuclear waste?