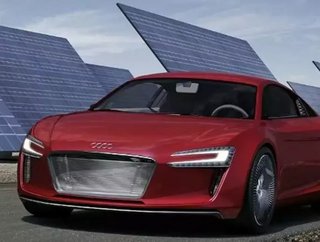 Audi has released details of its first all-electric vehicle, the R8 e-tron. The sleek and sexy car is set to arrive in late 2012, and is Audis first of...

Audi has released details of its first all-electric vehicle, the R8 e-tron.  The sleek and sexy car is set to arrive in late 2012, and is Audi’s first of many electric vehicles (EV) as the company plans to be a top EV manufacturer by 2020.

Currently under design in Heilbronn-Biberach, Germany, Audi has invested $90 million into developing it and other electric cars thus far.

The R8 e-tron is a mid-range sports car that can accelerate from 0 to 62 mph in just 4.8 seconds.  The car weighs roughly 3,527 pounds, and Audi reports that specialized developers were brought in to design the vehicle.

Audi is investing over $7 billion on two new German production facilities over the next four years, one of which will be the manufacturing home of the R8 e-tron all-electric car.

Audi faces competition, however, in the all-electric luxury sports car market.  Tesla Motors has already been producing cars that are faster and have a longer range than the R8 e-tron.  BMW is looking to release its ActiveE to customers this coming fall.  But although Audi is a bit late in the game, the vehicle manufacturer believes that customer loyalty and the vehicles overall performance will make it a strong competitor.