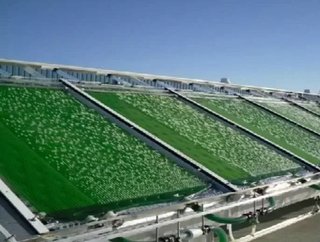 Audi announced today that it will team up with biofuel startup Joule to test and validate the alternative fuel for the auto industry. Joule Unlimited...

Audi announced today that it will team up with biofuel startup Joule to test and validate the alternative fuel for the auto industry.

Joule Unlimited, a Massachusetts biotechnology company, has developed a genetically-engineered organism that secretes diesel or ethanol under conditions of sunlight, water and carbon dioxide. It can be manipulated to produce renewable fuels on demand in mass quantities in facilities of any size and at costs that are competitive with the cheapest fossil fuels.

According to Joule, this could be a huge breakthrough in energy independence. “If we're half right, this revolutionizes the world's largest industry, which is the oil and gas industry. And if we're right, there's no reason why this technology can't change the world,” said Joule's chief executive Bill Sims.

Last week, the company commissioned a demonstration plant in New Mexico to display its radical approach to making ethanol from sunlight and CO2 on a fraction of the land used with traditional methods.

As of February, the potential of the company's production process was supported with the publication of a detailed analysis of its breakthrough platform. Published by Photosynthesis Research, the peer-reviewed article examines the company's advantages of producing renewable fuel and chemical production with yields up to 50 times greater than the maximum potential of any process requiring biomass.

"In contrast to research of the past, we have shown that photosynthesis is the superior platform technology for direct, renewable fuel production at the volumes and costs required to supplant fossil fuels," said Dan Robertson, PhD, co-author of the article and Senior Vice President of Biological Sciences at Joule. "The engineering of a photosynthetic microorganism to directly synthesize an infrastructure-compatible product, and continuously secrete that product, represents a landmark in industrial bioprocessing. The process technology is equally unique in that a highly-efficient, low-cost SolarConverter® system enables unprecedented productivity, as fully explained in our analysis and now being demonstrated at pilot scale."

The deal with Audi will serve as a huge point of interest in the market of carbon-neutral driving.

“Joule and the fuels it is developing can ultimately enable sustainable mobility, as its highly-efficient process consumes waste CO2 emissions, avoids depletion of natural resources and doesn’t require agricultural feedstock or arable land,” says Reiner Manglod, the head of environmental products at Audi in a statement.