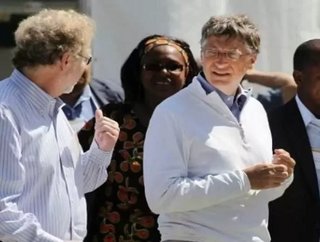 World leading philanthropist Bill Gates is betting on solar powered toilets to improve the health of the developing world. Gates handed a $100,000 pri...

World leading philanthropist Bill Gates is betting on solar powered toilets to improve the health of the developing world. Gates handed a $100,000 prize to the California Institute of Technology Tuesday for its work on a self-contained, sun-powered system that recycles water and breaks down human waste into storable energy.

Some 1.5 million children under 5 die every year due to sanitation problems from open defecation. Modern day toilets are not applicable to the developing world, requiring too much water and energy. According to Gates, around 2.6 billion people, 40 percent of the world's population, lack access to safe sanitation.

Caltech's solar powered bathroom breaks the waste down into hydrogen gas, which can be stored in hydrogen fuel cells as back-up energy source for night operation or used in low-sunlight conditions. Water recovered from the process is recycled to provide water to flush the toilet, which is designed to be buried underground beneath a conventional-looking stall.

The Bill & Melinda Gates Foundation has invested about $6.5 million in funding thus far to toilet projects under various organizations in its “Reinvent the Toilet Challenge,” giving grants to eight universities around the globe to help tackle the problem.

“Imagine what's possible if we continue to collaborate, stimulate new investment in this sector, and apply our ingenuity in the years ahead," Gates said at his foundation's Seattle headquarters on Tuesday. "Many of these innovations will not only revolutionize sanitation in the developing world, but also help transform our dependence on traditional flush toilets in wealthy nations."

The foundation is spending about $80 million each year on water, sanitation and hygiene issues. According to Gates, sparking these new inventions will play a critical role in global health over upcoming years, redesigning a technology that has not fundamentally changed since its inception in 1775.