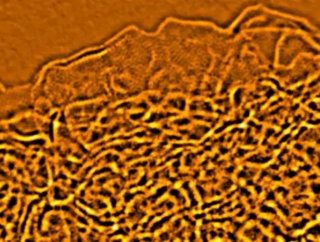 Researchers at the University of Texas in Austin have created a three-dimensional carbon &lsquo;sponge that acts as a supercapacitor, holding a charge...

Researchers at the University of Texas in Austin have created a three-dimensional carbon ‘sponge’ that acts as a supercapacitor, holding a charge similar to batteries. The carbon sponge performs significantly better than traditional supercapacitors and could offer competition to lithium-ion batteries as the 21st century’s electric renaissance sees more electric vehicles on the roads and smarter, distributed energy grids being developed.

Supercapacitors operate similar to batteries, but instead of relying on a chemical reaction to store and generate electricity, they hold energy more similar to static electricity. They are capable of delivering energy at a faster rate and more efficiently than batteries. While traditional supercapacitors have been limited in the amount of energy they can store, the new carbon ‘sponge’ created by University of Texas researcher Rodney Ruoff and his team may offer increased storage potential.

The carbon ‘sponge’ supercapacitor currently has a storage capacity similar to lead-acid batteries, while retaining the higher power density and speed of delivery characterized by supercapacitors.

The carbon sponge when viewed under a microscope looks similar to a brain, with layers of densely packed wrinkles. Therefore, the structure itself has a very large—albeit condensed—surface area. “We synthesized a new sponge-like carbon that has a surface area of up to 3,100 square meters per gram (two grams has a surface area roughly equivalent to that of a football field). It also has much higher electrical conductivity and, when further optimized, will be superb for thermal management as well,” says Ruoff.

To create the carbon material, the research team used microwaves to exfoliate graphite oxide, which was then treated with potassium hydroxide. This created a porous carbon structure, full of microscopic holes. When combined with an electrolyte, the carbon structure can hold an enormous charge. The structure’s shape was confirmed by viewing it through some of the highest resolution microscopes in the world at the U.S. Department of Energy’s Brookhaven National Laboratory. The curved, single-atom-thick walls reveal a brain-like crystalline carbon structure that may hold untold potential as the next phase in energy storage.