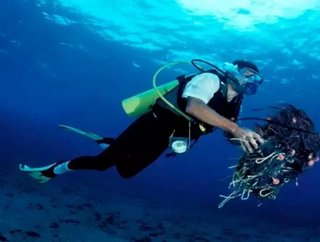 Sydney Harbor, one of the world&#39;s most beautiful seaports, hides an ugly underbelly: a seabed blanked with garbage as old as 200 years. As a busy...

Sydney Harbor, one of the world's most beautiful seaports, hides an ugly underbelly: a seabed blanked with garbage as old as 200 years. As a busy coastal city, the loose garbage has long accumulated offshore—out of sight and out of mind to the average Australian.

Environmentalists say the waste causes a plethora of problems, including leaching toxic chemicals into seawater and harming local marine life. Fortunately, Australians are pulling together to alleviate some of the damage done. A coalition of local divers have begun volunteering their time to remove some of the mass amounts of trash from the harbor floor.

"The stuff on the bottom has been accumulating for 200 years, and it's only now we're really trying to pull it out in any sort of quantity," local diver Dave Thomas tells Australia's Seven News. "It's been out of sight and out of mind."

Plastic in the Ocean: What's the Solution?

Eco Divers and the Two Hands Project are leading the effort, but it won't be easy. Picking up small debris will be a labor intensive job, while the rest will consist of removing larger objects such as old bicycles and bathtubs. The cleanup crews will cover some 12,000 acres of waterways and 170 miles of shoreline, where over 900 metric tons of garbage washes up every year.

Regardless of the amount of garbage the organizations pick up or the extent of time it will take them to make an impact, the progress is well worth the trouble from their point of view.