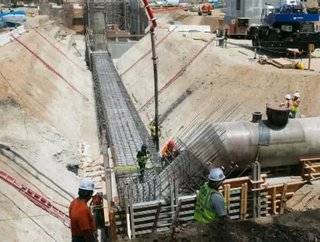 With the sun low in the horizon over the Pacific Ocean and the sky slowly turning from Capri blue to blood orange, surfers try to catch one last wave a...

With the sun low in the horizon over the Pacific Ocean and the sky slowly turning from Capri blue to blood orange, surfers try to catch one last wave as families fold up their chairs and shake out their towels on the beach in Carlsbad, Calif.  Behind them in the distance the dingy gray smokestack of the Encina Power Plant juts upward as gangly construction cranes sway in the background.

The cranes are there working on the new Carlsbad Desalination Plant, which when it opens in 2016, will bring the largest, most technologically advanced, and energy-efficient desalination plant in the western hemisphere to Southern California. The project will include energy recovery devices, an advanced pumping system, and cutting edge reverse osmosis membranes.

“We are using the most current state-of-the-art evolution of those technologies, but still have it commercially tested and highly reliable,” says Jonathan Loveland, PE, vice president, Technical Services for Poseidon Water, the developer of the plant.

The plant, a $1 billion project 12 years in the making, will produce 50 million gallons per day of treated water, which could serve up to 112,000 households in northern San Diego County. The area, which is semi-arid and relies on water pumped in from rivers and lakes in Northern California and Colorado, will finally have a locally-controlled, drought-proof supply of water that meets all state and federal drinking water standards.

In November 2012 the San Diego County Water Authority signed a 30 year water purchase agreement to buy the 50 million gallons per day of water from the Carlsbad Desalination Plant. Poseidon Water then agreed to build a 10 mile pipeline to the Twin Oaks Valley treatment facility in San Marcos that feeds into the county water system.

The worksite is adjacent to the 60 year old Encina Power Plant and sits on the Agua Hedionda Lagoon, a few hundred yards from the Pacific Ocean. After removing old industrial equipment and some hazardous material from the site, construction began in earnest this spring.

But before the first pipe was laid, concrete pad poured, or water tank was constructed, Poseidon Water made sure the latest technology in seawater filters, pumps, and energy recovery would be implemented into the desalination plant.

The technology Poseidon is using for salt removal is spiral wound reverse osmosis membrane. The membranes are eight inches in diameter and 40 inches long and there will be 15,000 of them in the plant to remove the salt from the seawater.

It’s more of a molecular separation process than a traditional filter. There are pores in the membrane that allow water to move through the membrane faster than salt molecules. In the end of the process, one side of the membrane has concentrated salt and on the other side is relatively pure water.

“It is filtering but it is doing it on a much different level than pretreatment filters can,” Loveland says. “It’s really a separation process by which you remove the salt.”

To push the seawater through the reverse osmosis membranes a unique pumping system, called a pressure center design, will be used. The pumps feeding the 14 RO trains have 8,000 horsepower motors attached and a unique configuration that offers energy savings.

“Basically, we have large constant speed reverse osmosis pumps, because to perform RO on seawater, we need to pressurize the system to somewhere between 800 to 900 psi,” Loveland says. “These are some of the largest pumps of their kind; you would only get larger pumps on water distribution systems like on the aqueducts in California.”

When water is pressured to 900 psi to move through the membranes, a lot of that energy is left over. Those energy leftovers will be captured and transferred back to the front of the system. The PX Pressure Exchanger Q300 unites, provided by Energy Recovery Inc., consume no electrical power and recycle lost energy in the form of pressure with 98 percent efficiency.

“At 50 million gallons per day, we chose the most reliable and efficient energy recovery technology on the market,” says Avshalom Felber, CEO of IDE Technologies, the contractor of the project, which awarded Energy Recovery the contract for its ERDs. “For larger plants such as the Carlsbad Desalination Project, it's important to weigh the energy saving solutions and economies of scale.”

By using the energy recovery devices, the plant should save an estimated 116 million kilowatt-hours of energy per year, the equivalent of $12 million. This energy savings will also reduce CO2 emissions by 41,000metric tons per year – roughly the annual greenhouse gas emissions from 8,542 passenger vehicles.

“The Carlsbad project has moved the needle for the desalination industry in the U.S.," says Tom Rooney, CEO at Energy Recovery. “We're excited to bring our experience and technologies to help this project and future U.S. desalination plants.”

“There's a lot of dilution that takes place before that water goes back into the ocean and that's done to minimize salinity impact on marine life,” Loveland says. “I wouldn't say it's usual to do it that way – there are facilities around the world where they don't do that – but the environmental stewardship of the coastal area is important to us.”

In addition, the Carlsbad desalination plant is signaling a trend for upcoming projects in the U.S. According to Global Water Intelligence, there are currently more than 12 desalination projects in various stages of planning in California, including one in Huntington Beach, and more than 40 medium and large projects on the drawing board across North America.