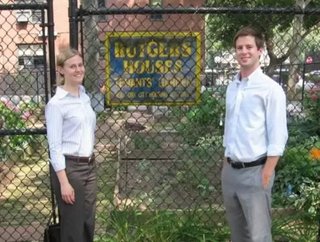 Though the first official day of winter isn’t until December 22, New York City is already well into heating season. And with over 178,000 apartments to keep warm, the New York City Housing Authority (NYCHA) knows all too well that cranking up the heat means drastic spikes in energy bills. However, that is not the case for one of our Bronx developments.

This year NYCHA installed a new technology known as Wireless Energy Modules in the 14 buildings that make up Castle Hill Houses. This technology allows NYCHA to provide consistent, comfortable temperatures to our residents in the 2,023 Castle Hill apartments throughout the year, while actually saving money and energy. NYCHA worked with Environmental Defense Fund (EDF) on this effort. EDF is a national organization widely recognized for innovative solutions to tough problems, such as increasing energy efficiency and reducing carbon emissions.

With the help of EDF Climate Corps, NYCHA analyzed the potential of installing Wireless Energy Modules across our entire portfolio. We found that NYCHA could save $31 million in annual heating costs and up to $25 million in annual electric costs and avoid 177,000 metric tons of CO2 emissions each year.

The savings potential of the project:

What is even more exciting than the impressive savings opportunities is the power of scale the technology offers. The benefits of Wireless Energy Modules aren’t unique to NYCHA and can be realized by public housing authorities and private landlords across the nation. The ability to measure temperature at the apartment level and to heat buildings more consistently provides immense savings potential, as well as greater comfort for residents.

If NYCHA can save $56 million and avoid tons of emissions each year in New York City alone, just think of the savings that would result from a national commitment from housing authorities and private landlords to improve energy efficiency. Now that's a New Year’s resolution worth making, and keeping!