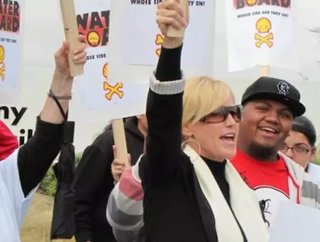 Environmental activist Erin Brockovich will take part in an upcoming documentary &ldquo;Last Call at the Oasis,&rdquo; focusing on the growing global...

Environmental activist Erin Brockovich will take part in an upcoming documentary “Last Call at the Oasis,” focusing on the growing global water crisis—from the drying up of Lake Mead to the fight to keep herbicides form tainting drinking water around the world.

In a partnership with Google, Brockovich will also be involved in a project to map disease clusters around the world, tying their relationship to contaminated water supplies. In a roundtable discussion with the Huffington Post, Brockovich said that the project began as she was receiving up to 50,000 emails per month from people reporting health issues in their communities. She then began to plot the communities on a map, which turned into being a very important “life project” for the activist.

With children in the military, another focus of her project in particular hits close to home. Studies are being conducted linking past chemical exposure and groundwater contamination at the Marine Corps' Camp Lejeune to increased levels of disease among former residents.

Brockovich told HuffPost, "You are looking at soldiers who would give their lives so we are afforded this opportunity to be here today. They come home from three, four tours of duty, and they get poisoned on their own soil. If we stand down on them, if we don't rally to look at this, it will be the biggest black eye on America I've ever known."

Brockovich hopes the new film will serve as a wake up call. From the producers of “An Inconvenient Truth” and “Food, Inc.,” Jessica Yu's film will be out this month.