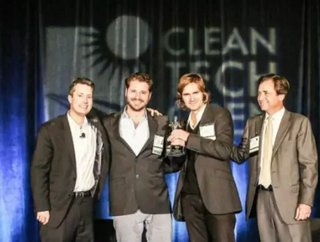 The winning team, ECF Farmsystems from Germany, was our first-ever Global Ideas Winner focused on agriculture,” said Kevin Braithwaite, chair of the Cleantech Open Global Ideas Competition. “As 14 to 24 percent of global greenhouse gas emissions and 70 percent of humanity's fresh water usage are as a direct result of agricultural activity, ECF Farmsystems could have a major impact far outside Germany.”

The competition brings early-stage start-ups with breakthrough clean-tech ideas to Silicon Valley to compete for the Global Ideas Award. It is organized by U.S.-based Cleantech Open, the world's largest clean-technology accelerator.

For the finals, 28 teams from around the world convened in San Jose, Calif., to pitch their businesses. After two days of intensive judging, a group of five winners were selected to present to a final jury of investors and technology experts.

Three out of the five finalists were European start-ups supported by Climate-KIC, Europe's largest public-private innovation partnership focused on mitigating and adapting to climate change, and took home the overall prizes of their categories.

“The very positive result for Europe in this global competition shows that Climate-KIC's acceleration program is paying off,” said Hero Prins, Climate-KIC's entrepreneurship director. “Our start-ups are leading the way and act as role models for a new business culture across Europe.”

Start-up ECF Farmsystems picked up the main prize of the competition, the Global Ideas Award. The company is enrolled in Climate-KIC's acceleration program in Berlin, Germany, and has developed scalable aquaponic farm systems, which have the potential to dramatically reduce water usage and carbon emissions.

In addition to winning the overall award, ECF harvested a number of other awards: the People's Choice Award for their technology pitch, and the overall winner in the Agriculture, Water and Waste category.

“It is a great recognition to be part of this fantastic event,” said Nicolas Leschke, CEO of ECF Farmsystems. “All clean-tech start-ups are winners because we dedicate our lives to leaving a mark for future generations.”

Solar start-ups Eternal Sun was announced as overall winner in the Energy Efficiency category. The company is supported by Climate-KIC in the Netherlands and is based in Delft.

The company supplies innovative and accurate solar simulation technology that enables customers to accurately test the performance and reliability of products in the solar photovoltaic, solar thermal, chemical, and bioenergy industries.

The third Climate-KIC start-up to make it to the finals was Naked Energy, which won the overall award in the Energy Generation category.

Naked Energy is supported by Climate-KIC in London, UK, and has developed an innovative, highly efficient hybrid solar technology that generates combined heat and power.

Climate-KIC, based in London, UK, is the European Union's largest public-private innovation partnership focused on mitigating and adapting to climate change. Climate-KIC consists of companies, academic institutions and the public sector.

“There is a real and imminent need for clean technologies. It is great to see Climate-KIC's start-ups get global recognition - bringing Europe's new entrepreneurial efforts in this field to the forefront,” Prins said.

Climate-KIC currently has centers in France, Germany, The Netherlands, Switzerland and the UK and is represented in the regions of Valencia, Central Hungary, Emilia Romagna, Lower Silesia, Hessen and the West Midlands.

Climate-KIC is one of the Knowledge and Innovation Communities (KICs) created in 2010 by the European Institute of Innovation and Technology (EIT), the EU body tasked with creating sustainable European growth while dealing with the global grand challenges of our time.

Since 2006, through its annual business competition and mentorship program, the Cleantech Open has enabled 727 clean-tech startups to bring their breakthrough ideas to fruition, helped its alumni companies raise more than $800 million in external capital, and created thousands of green-collar jobs.