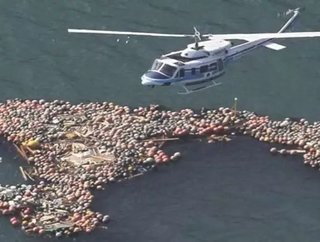 The National Oceanic and Atmospheric Administration will provide a total of $250,000 in grants to the states affected by debris from Japan&#39;s tsun...

The National Oceanic and Atmospheric Administration will provide a total of $250,000 in grants to the states affected by debris from Japan's tsunami: Alaska, Washington, Oregon, California and Hawaii.

The $50,000 awarded to each state for marine cleanup could be available as early as this month. Sounds generous? Not according to US Sen. Mark Begich, D-Alaska, who had requested at least $45 million in funding.

The tsunami created a “slow-motion environmental disaster that will unfold over several years,” he said in a statement. It won't be enough to clean up a single beach “let alone the type of effort necessary for a large-scale planning and cleanup effort covering multiple states.”

An estimated 1.5 million tons of debris floated off the coasts of Japan from the tsunami, according to the Japanese government. The NOAA reports that the waste is spread out in an area of the North Pacific Ocean roughly three times the size of the contiguous U.S.

Without knowing the size or direction of the debris, however, it's hard to say how much funding would be appropriate. Some of the debris has already hit North American shores, but some of it is hard to distinguish as specifically from the tsunami incident. Of the 529 reports from the public that the NOAA has received suspecting pieces of tsunami debris, only 10 were confirmed.