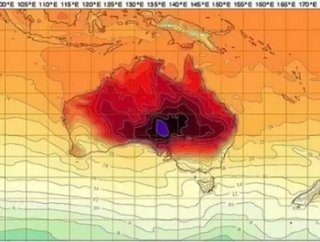 [image via Bureau of Meteorology] Temperatures in Australia are getting so hot that meteorologists have had to adjust its weather forecasting chart. N...

[image via Bureau of Meteorology]

Temperatures in Australia are getting so hot that meteorologists have had to adjust its weather forecasting chart. New colors have been added to the scale—deep purple and pink—to extend the previous capped temperature of 50 degrees to 54 degrees Celsius.

Well, that can't be a good sign... Over the next week, regions that previously maxed out around 48 degrees Celsius are likely to hit 50 or more, breaking the country's all-time high record of 50.7 degrees Celsius from 1960.

"The scale has just been increased today and I would anticipate it is because the forecast coming from the bureau's model is showing temperatures in excess of 50 degrees [Celsius]," the bureau's climate monitoring and prediction unit chief David Jones told the Sydney Morning Herald.

The first six days of the New Year in Australia were all among the hottest 20 days on record, with yesterday and today likely to be added to the list.

The intense “dome of heat” is contributing to more than just blistering sunburns; massive wildfires are becoming more frequent across southeastern Australia.

"You don't get conditions worse than this," the New South Wales Rural Fire Service Commissioner told the Associated Press.