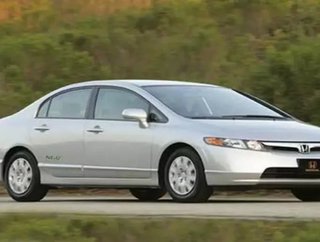 Written By: John Shimkus Natural gas is being hailed as the next great thing to take over now that the world is coming to its senses about the dwindlin...

Natural gas is being hailed as the next great thing to take over now that the world is coming to its senses about the dwindling oil supply. With shale gas reserves offering abundant supplies, it seems natural gas will offer a solution—all be it a temporary one—to the electricity generation and transportation sectors. Now, top car manufacturers like Honda and GM are taking natural gas seriously as an alternative to traditional petroleum fuel, and are preparing to launch natural gas powered cars and trucks within the next few years.

Thought electric cars were the next transport fad? Well they certainly will be gaining in popularity, but natural gas cars are far cheaper to produce than lithium-ion powered electric vehicles. For example, the Honda Civic GX CNG will run on compressed natural gas and cost just $25,490 compared to the all-electric Chevy Volt, which will cost $41,000, or the $32,000 Nissan Leaf (both considered the most affordable of commercial electric cars). The Civic GX CNG is due for release next year in all 50 U.S. states.

GM’s lineup of natural gas truck and van models has been on the market since last year. Chrysler is also gearing up for a natural gas push, and with parent company Fiat already manufacturing and selling natural gas vehicles in Europe and South America it should be a fairly simple transition.

Like electric vehicles, natural gas vehicles may soon get some help from the U.S. government. A newly introduced congressional Natural Gas Bill has already gained 154 sponsors and if passed will offer credits for the purchase of natural gas vehicles, similar to what is being done with electric cars currently.

So what we are likely to see is a massive development of electric infrastructure side-by-side with natural gas infrastructure. This is actually a good thing for various reasons. Electric charging stations rely on grid electricity to operate, and there are several exciting renewable electricity generation methods—such as solar, wind, geothermal, etc.—that will be able to consistently provide electricity as they develop.

With natural gas, however, the supply that can be extracted from the Earth is limited, and you run into the same supply problems as with oil. But there are different methods of collecting biogas—the gas released from biological organisms—that could continue to feed natural gas infrastructure. In Sweden for example, the entrails of commercially butchered livestock are processed and methane collected to power the country’s transportation system. These are the kinds of energy solutions that will get us through the 21st century, and a gas/grid infrastructure combo is an excellent way forward!