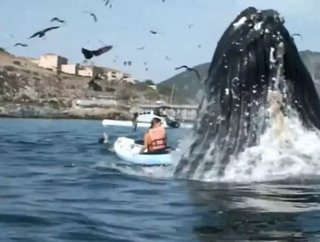 As the Diablo Canyon Nuclear Power Plant prepares for seismic testing off California's Central Coast, they've got some unexpected company. Endangered humpback whales have been converging in the area, raising questions about the safety of such tests that could pose as a threat to marine life.

Starting in September, Pacific Gas & Electric Co. will fire high energy air guns dragged in an array behind a research vessel in order to determine the shoreline fault's deeper regions and produce a 3-D map. Though the research could provide invaluable information about a seismic active area in California post-Fukushima, others are unsure if frightening, deafening and killing sea life is worth it.

PG&E is already conducting studies in the area using less energy, but has warned fishermen to remain at least a mile away from its vessel to avoid entanglement with the equipment. The company has assured the public that “procedures have been implemented to monitor and protect marine mammals while the study is underway.”

We'll just have to see how the untold number of humpback whales converging in the area will respond. Meanwhile, they're making their presence known: