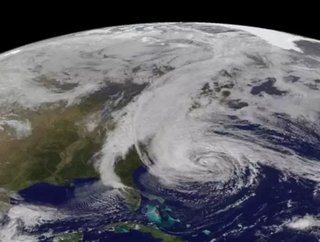 Click here to experience this article in our digital reader Written by John Shimkus Climate change can no longer be denied, whether man-made or not, a...

Climate change can no longer be denied, whether man-made or not, and the recent superstorm Hurricane Sandy is just another example of weather run amok in recent years. In fact, it was one year ago that Hurricane Irene slammed into the American northeast, followed by an unseasonal ice storm just a few weeks later, also resulting in massive power outages and damage to private property. Energy Digital previously covered the story of New Jersey’s Hydrogen House, a home that generates and stores its own energy supply, and its resilient ability to keep the lights on while neighbors suffered without power after Hurricane Irene. Now, one year later, the Hydrogen House has done it again and survived Hurricane Sandy!

The Hydrogen House uses the excess renewable energy generated from its solar panel arrays to run an electrolyzer, which splits water into hydrogen and oxygen. The hydrogen is stored in safe low-pressure tanks onsite. During cloudy days, or in emergency situations like Hurricane Sandy, the Hydrogen House recovers energy from the stored hydrogen with the help of a fuel cell. The fuel cell creates a reaction with the oxygen in the air, resulting in electricity production. The only emissions produced in the process are pure water!

While New Jersey’s electric utility companies scrambled to fix downed power lines and busted transformers, the Hydrogen House never lost power. “We had neighbors coming by during the power outage to charge their cell phones,” says Hydrogen House developer and owner Mike Strizki. “All my neighbors have gone without power for over a week and have had to wait several hours in lines at the gas stations to get fuel for their back-up generators.”

However, Strizki’s Hydrogen House did not come cheap, and the prototype energy independent home cost nearly half a million dollars to develop. Nonetheless, Strizki has been continually inventing new hydrogen devices to try and make the technology more affordable and available to the masses. His most recent invention is called the “Joule Box.” This portable power station combines lightweight flexible film sun-tracking solar panels and a micro-wind turbine with onboard energy storage in the form of batteries, ultracapacitors and self-generating hydrogen to create a robust renewable energy alternative to gasoline generators. The Joule Box is ideal for off-grid energy needs, as well as for emergency power generation. What’s more, the Joule Box is portable for easy mobility and delivery, it eliminates the need to buy another gallon of fuel, and the unit actually survived the gale force winds of Hurricane Sandy! The Joule Box is available for sale through Strizki’s company Renewable Energy Holdings, which has gained respect in the solar power industry with its flagship product, Genmounts™, a low cost, easy-to-install ballasted solar panel racking system for commercial ground and rooftop pv installations.

Inventor Mike Strizki’s continuing pursuit of hydrogen technology has proven to be such an inspiration that Michael Henning of Sovran Films has decided to make him the centerpiece of his new documentary, “Strizki: Keys to the Cage.” Henning gained international acclaim for his 2003 release, “Hempsters: Plant the Seed,” which documents the political struggle to legalize industrial hemp for textile, food and fuel production in the United States. His new project will focus on Mike Strizki’s own struggle to bring renewable hydrogen energy to the world. “The world needs to know his name, his work, and his mission,” says Henning. “And we're here to do just that through the amazing and far-reaching powers of film.” Sovran Films is co-producing the documentary with Remedia Global, the company currently producing the commercial for Mike Strizki’s Genmounts™ solar racking system. The film is slated for release late 2013.

For more information on the Joule Box portable charge station and to learn more about the upcoming documentary, “Strizki: Keys to the Cage,” visit the Hydrogen House Project website at www.hydrogenhouseproject.org. For more information on Genmounts solar racking system and web PR and Media for the renewable energy industry, visit www.remediaglobal.com.