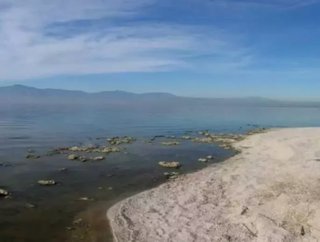 SANTA BARBARA, Calif.--(BUSINESS WIRE)--HyperSolar, Inc., the developer of a breakthrough technology to produce renewable hydrogen and natural gas using water and solar power, today announced that it will team with Suncentrix LLC to explore the potential of deploying its technology at the Salton Sea to simultaneously produce renewable energy and address environmental problems.

The Salton Sea is the largest lake in California, encompassing 378 square miles in Imperial and Riverside counties, in the Southeastern edge of the state. In the past century, it has been used as the repository for agricultural wastewaters originating in both the Imperial and Coachella Valleys. As a sink for wastewaters, the Sea is not only degrading over time, but the surrounding area is also plagued with dust issues.

"We are delighted to undertake this important feasibility study with Suncentrix," said Tim Young, HyperSolar's CEO. "The Salton Sea offers large volumes of two of the most important commodities required by our breakthrough solar powered technology to produce renewable hydrogen and natural gas: sunlight and organic rich water. The high concentration of organic materials from the agricultural runoff is nearly ideal for our process, and the high salinity will further enhance the efficiency of our technology."

Steve Decker, CEO and Managing Partner of Suncentrix commented, "While it is California's largest inland water body, and an important food resource for birds migrating along the North American Flyway, the Salton Sea is in a state of decline. We intend to explore the use of the hydrogen produced by HyperSolar's novel process for the production of electricity through utility-scale hydrogen fuel cells. The benefits can be substantial. By deploying HyperSolar's reactors on the increasingly exposed sea beds around the Salton Sea, we can produce energy for regional use, improve the water quality for wild life ecosystems, and decrease the rate of water evaporation to mitigate dust problems that contribute to poor air quality in the nearby area."

Mr. Young concluded, "While the development of renewable energy is an important cause, the situation at the Salton Sea proves that the wastewater from human activities and energy consumption by human activities are highly correlated. The more energy people consume, the more wastewater is produced. It is only with a renewable energy technology, such as HyperSolar's, that sustainable renewable energy can truly be realized. We believe that once we successfully demonstrate our technology at the Salton Sea, we will have a model to utilize the organic rich waters of the world and the abundance of daily sunlight to deliver a sustainable global energy solution.”