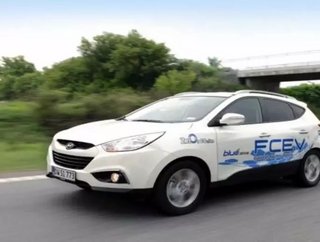 Hyundai Motor will showcase what it calls the world&#39;s first production fuel-cell electric vehicles at this week&#39;s Paris auto show. After year...

Hyundai Motor will showcase what it calls the world's first production fuel-cell electric vehicles at this week's Paris auto show.

After years of lagging behind the competition in battery technology, the South Korean automaker is betting on fuel-cell electric vehicles (FCEVs), which can run five times as long as E.V.s minus the hours of charge time. The cars, which convert hydrogen and oxygen into water and generating power to drive an electric motor, are a more realistic technology, according to Hyundai.

The greatest challenge the automaker faces now are production costs, which can run two to three times as much as traditional E.V.s—not to mention the lack of refueling infrastructure.

As the company wrangles with production costs, it will start out by just offering 1,000 FCEVs from December through to 2015 in Europe at an initial price of around $88,000...eek.

"We aim to reduce prices of fuel-cell vehicles to match battery cars by 2020-25," Lim Tae-won, the director in charge of fuel-cell research at Hyundai and its affiliate Kia Motors, told Reuters ahead of the Paris auto show.

Although studies have predicted the number of FCEVs will see a significant increase in upcoming years, demand will ultimately depend on customer acceptance of the technology and the availability of hydrogen fueling stations. Linde, a German industrial gases producer, will invest tens of millions of euros with Daimler to construct some 20 stations by 2015.

Will fuel-cells become the leading alternative fuel technology? Possibly, says Liam. Even though E.V.s have the upper hand now, he believes battery powered electric cars may have entered the market too early without resolving range anxiety and costs issues. Hyundai's FCEV can run up to 365 miles, while Nissan's Leaf can only run up to 73 miles on a full charge.

Until costs and infrastructure can catch up, however, it appears that E.V.s will still have a valid position in the marketplace for many years ahead. Like wind and solar in the global renewable energy portfolio, cleaner vehicle technologies will all likely develop a strong position in the market. From fuel-cells to electric cars and natural-gas powered vehicles, it appears the landscape of transportation—much like energy—is taking an all-of-the-above approach.